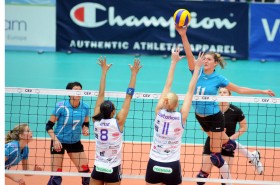 The first set started off with nervousness on both sides due to the significance of the game, for SSC implying the latest chance to reach the next round of the competition, for VILLA CORTESE to secure the next stage with a win.

The ladies from Northern Germany took the first lead at 6:4 with quick points by Patricia Thormann.

Due to some serving mistakes VILLA CORTESE bounced back to 7:7.

After that decisive phase in set 1, the Italians raised their level of play by displaying great defense and showing tremendous blocks.

A small group of fans from Italy were cheering and singing loudly to support the great run of the Italian top team.

Aurea Cruz, team captain for VILLA CORTESE, led her team with good defense and even better spikes to increase the lead to up to 6 points. In the end of the set the guests struggled with their defense so that SSC made it close to 21:23.

However, VILLA CORTESE won the big points and therefore the set 25-21.

The second set began the same way like the first one: SSC took an early lead, then VILLA CORTESE fought back to lead the game 8:5 at the first technical time-out.

Midway through the second set, the local heroines of SCHWERIN played their very best Volleyball, scoring many direct points and showing tremendous effort.

The game was tied 17:17 when Patricia Thormann finished the best rally of the night with a superb spike getting the crowd on their feet.

Nevertheless, VILLA CORTESE never gave in and took the lead by pushing their defense to the best.

They used the momentum to win the second set 25-22 showing great fighting spirit against a good SCHWERIN team and a loud crowd.

In the third set, the SSC ladies never seemed to be able to find a way to their game.

VILLA CORTESE dominated the whole way with easy points which broke the resistance of SCHWERIN.

The Italians won also the third set 25-17 and earned themselves the victory with a “great performance and clever play”, as head coach Marcello Abbondanza says.

Teun Buijs, SCHWERINER SC head coach, on the other side was not pleased with his team’s performance.

“We lacked a great deal of self-confidence and concentration tonight. Except for the second set, we never found our rhythm and clearly VILLA CORTESE deserved the victory”.