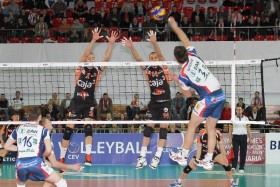 Zaksa performed well especially from the serving area thereby regularly shaking the Spanish defense and could easily claim the opening set with the score of 25-14.

The second set was much closer, with CAI TERUEL showing some more consistency in reception keeping the score close up to 8 all.

The guests from Spain eventually took the lead by the second technical time-out (15:16) before Gladyr got the home side back on track.

After a very close final rush an attack of Michal Ruciak sealed the final 26-24 for the hosts.

The third set was fully controlled by Zaksa that gradually opened the gap (13:9) and eventually went for a comfortable 25-15.

It was a good result for the Polish team that suffered the absence of Frenchman Antonin Rouzier who was nevertheless well replaced by Dominik Witczak, with head coach Stelmach eventually using some reserves for the last section of the game.

“We are happy to qualify for the next stage of the competition as our minimum goal is achieved” he says.

“My congratulations to Zaksa, we could not find a way to stop them tonight.

After losing the second set we were no longer capable of coming back into the game” adds Oscar Novillo, the mentor of CAI TERUEL.

CEV CL: Vakifbank lives up to its reputation to score away win in Romania