CEV CL: Vakifbank lives up to its reputation to score away win in Romania

Constanta, Romania, January 10, 2011. The hosts and rookies of 2004 Tomis CONSTANTA did not succeed in providing some resistance to the titleholders of Vakifbank TTelekom ISTANBUL losing tonight their fifth match in Pool D of the 2012 CEV Volleyball Champions League in three straight sets (18-25, 19-25, 23-25). 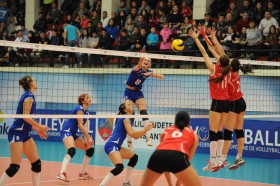 Home captain Claudia Gavrilescu says: “We always go for the maximum goal regardless if we are playing in Europe’s top competition or with the team which is being ranked last in our national league. Our intention was to deliver a good performance tonight to the delight of our fans and we did not think we were anyway going to lose as the ball is round and anything can happen out there”.

“We fought to score a win tonight and also to live up to our reputation being last year’s champions. I think we provided the audience with some good Volleyball tonight” adds Vakifbank leader Gözde Sonsirma.

2004 Tomis CONSTANTA was strengthened right during the Christmas time by the addition of Brazilian opposite Thais Julio but the guests from Turkey dictated the pace in the opening set all the way through (4:8, 10:16, 18-25).

Malgorzata Glinka paced Vakifbank in set 2 and even though the Romanian team fought bravely, still the guests went for the 0:2 (19-25).

Vakifbank was not to stop also in set 3 taking the lead at both technical time-outs (5:8, 10:16) to eventually seal the final 0:3 (23-25) after the home side had attempted a late, desperate comeback.

Malgorzata Glinka and Jelena Nikolic stood out tonight for Vakifbank.

Serbia: Young Serbian side does not give up

CEV CL: Schedule of 2. round matches