Leuven, Belgium, January 10, 2012. VfB FRIEDRICHSHAFEN qualified tonight for the Playoffs 12 of the 2012 CEV Volleyball Champions League after scoring a 1:3 away win (30-32, 23-25, 25-20, 21-25) in Leuven to edge Belgian rookie Euphony ASSE-LENNIK and making sure they will finish at least in second place their campaign in Pool B. 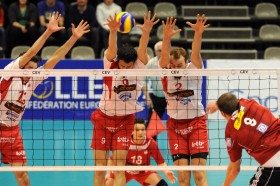 In front of some 2’500 fans both teams started nervously but some good attacks of Robin Overbeeke and Dejan Radic clipped a provisional 8:6 lead for the hosts at the first mandatory stop.

Two blocks on Overbeeke called for the 18 all and both teams scored with their side-outs until the set was finished by VfB FRIEDRICHSHAFEN with the score of 30-32.

The guests used very often their middle blockers to set the pace in set 2 (4:6, 9:12) and Overbeeke was substituted by Juan Carlos Barcala as he was struggling to find a way through the German block.

With the support of the home crowd Euphony fought back to 13:16 but the guests sped up again and by claiming the second set they had mathematically taken their ticket for the next stage of the competition.

ASSE-LENNIK played with glowing hearts in set 3 while the guests slowed down their tempo; the Belgians were up 16:8 at the second technical time-out but VfB stormed back to almost close the gap at 22:20.

Local head coach Marko Klok asked for a break to stop that comeback and two points scored by Barcala and an ace of Tolar sealed the final 25-20 for Euphony.

The fourth set turned into another close race even though VfB was up at both mandatory stops (7:8, 13:16).

The German used their second opposite Jovanovic and setter Jovovic and even though Gertjan Claes played some great Volleyball for the home side, still Joao José finished it off for the group around Stelian Moculescu (21-25).