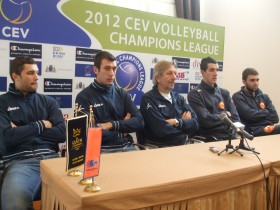 A couple of months ago Budvanska Rivijera was leading 2:0 while playing ACH Volley LJUBLJANA and therefore a win does not seem that impossible.

However, there will be much pressure on the shoulders of the home guys as this may be considered the real highlight of the season.

“They also have two good Canadians and two guys that were crowned European champions this past September in Vienna with the Serbian national team. We have played this side already a few times and all matches were equal. A good result would pay back the hard work we have been doing since this past August” he adds.

“We played really well in Ljubljana so I want to believe in a victory” stresses Nemanja Dukic.

“We even had the chance to win the away match but I think ACH Volley will be a tough opponent. We have not played any match in the past month and now we are back with the top teams in Europe, so this is not easy for us to display the same quality we were able to show in France before Christmas while playing TOURS VB”.

Budvanska Rivijera will be missing Vladimir Cedic but ACH Volley has a similar problem as middle blocker Matevz Kamnik is also injured.

“We came here to win and even though Budvanska is a respectable team we want to beat them and take maximum points in order to qualify for the Playoffs” says young Serbian star Uros Kovacevic.

“We have to play consistently especially as we know that BUDVA will try to profit of the advantage resulting from playing at home”.