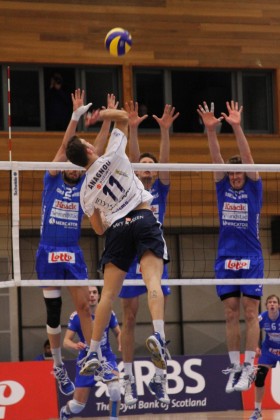 Knack opened with a good pace helped by the serving of Sergiu Stancu (5:2) and gradually widened the gap also with the contribution of 18-year old rising star Sam Deroo (16:8).

The home team dictated the tempo also for the remainder of the set going rapidly for the final 25-19.

Argentinean Cristian Poglajen paced ROESELARE in set 2 (8:5) and the score quickly moved to 16:8 once again with the attacks of Deroo who eventually sealed it at 25-14.

The third set provided a different scenario with G.C. LAMIA keeping the score very close before Knack found back its optimal rhythm with Deroo repeatedly scoring from the back row (23:20).

The affaire was not yet decided as G.C. LAMIA played strongly and the Greek side surrendered only after Poglajen smartly called for a block-out (29-27).

“We are very happy with the result but we still have to win the return game in Greece to avoid the golden set” says home coach Dominique Baeyens.

“We will have to serve well as we did tonight and if we succeed in doing this, I see good chances for my time to advance to the Challenge Round”.