Lausanne, Switzerland, January 10, 2012 – The International Volleyball Federation (FIVB) took a significant step towards recognising the Court for Arbitration for Sport (CAS) as its last instance resolution body for all disputes following an official signing ceremony at the FIVB headquarters in Lausanne, Switzerland on Tuesday. 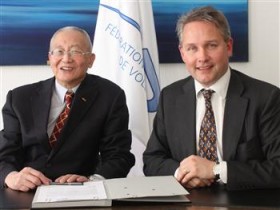 FIVB President Jizhong Wei and CAS Secretary General Matthieu Reeb signed an accord which will see CAS replace the International Volleyball Tribunal as FIVB’s ultimate dispute resolution body, subject to the approval of the FIVB Congress in September.

Tuesday’s ceremony follows the FIVB Board of Administration’s decision in 2011 to revise the internal dispute resolution procedures and to approve CAS as the last instance appeals body for all disputes within the FIVB family.

The Olympic family – international sports federations and National Olympic Committees – recognise the jurisdiction of CAS by including in their statutes an arbitration clause referring disputes to it.

Through compliance with the 2009 World Anti-Doping Code all federations have also recognised the jurisdiction of CAS for anti-doping rule violations.

The Court of Arbitration for Sport (CAS) is an institution independent of any sports organization which provides services in order to facilitate the settlement of sports-related disputes through arbitration or mediation by means of procedural rules adapted to the specific needs of the sports world.

CAS was created in 1984 and is placed under the administrative and financial authority of the International Council of Arbitration for Sport (ICAS).

CAS has nearly 300 arbitrators from 87 countries, chosen for their specialist knowledge of arbitration and sports law. Around 300 cases are registered by CAS every year.