CEV CL: Triple champions down Serbian side to qualify for Playoffs 12 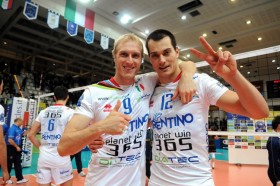 Triple champions down Serbian side to qualify for Playoffs 12

The score stood initially close up to 9 all before TRENTINO changed gear to go for a speedy 25-16.

The second and third sets were much closer but Partizan slowed down in some key moments so that the hosts could easily claim their ticket to the Playoffs 12.

In the last round of prelim play coming up next week in Spain with CAI TERUEL the Italians need to take just one point to secure they finish first in group C.

Middle blocker Mitar Tzourits (pictured on the right) was voted MVP of the game as he charted a stellar 91% of efficiency in attack plus 5 blocks.

“It was a strange match where we never really found our rhythm probably because our opponent did not play well” says home mentor Radostin Stoytchev.

“I could try some different options like using Sokolov as wing spiker and our second setter Zygadlo, and they both delivered a good impression. I am very satisfied with Tzourits who perfectly executed what I asked him to do”.

“This was a good game for us; we played against the best team in the world and this is our first participation in this competition” stresses Partizan head coach Milan Djuricic.

“We have a very young team and only via such matches the players can develop their skills for the years to come”.