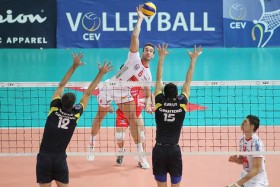 The Italians top the charts in Pool E with 13 points while Fenerbahce is already out of contention for the next stage of the competition and may be only moved to the Challenge Round of the CEV Cup.

The captain of Fenerbahce – and former star of Lube Banca Marche – Ivan Miljkovic was received with a standing ovation by the 2’000 spectators in attendance; he indeed spent 7 years in Macerata – from 2000 to 2007 – claiming with this team all major national and international trophies.

MACERATA totally dominated the game with some great serving and blocking and some kind of a reaction from the side of Fenerbahce arrived only in the second set, mainly via Miljkovic.

The break was eventually claimed by home middle blocker Alen Pajenk and by the provisional 2:0 Lube Banca Marche had already pocketed a pass for the Playoffs 12.

The third set turned into a close race with Fenerbahce missing two set balls (22:24) before MACERATA finished it at 28-26.

“We are very happy for the qualification to the Playoffs 12 – says Omrcen – because the Champions League is the most important target of our club for this season. Now we’ll do our best trying to win also next week in Novosibirsk to retain the leadership in the Pool”.

On the opposite side, the coach of the Turkish team Daniel Castellani pointed out how difficult it was to play Lube Banca Marche without Cuban spiker Leonel Marshall, who got injured some days ago and couldn’t join this match.

“He is one of our most important players, tonight the team did its best on the court but the rhythm dictated by Macerata was too high for us”.

CEV CL: Triple champions down Serbian side to qualify for Playoffs 12