Munich, Germany, January 11, 2012. It’s not over yet but the chances of Germany’s Generali UNTERHACHING to reach the Playoffs 12 of the 2012 CEV Volleyball Champions League look very slim. 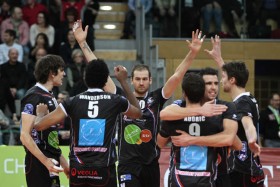 UNTERHACHING is forced to win vs. the already qualified Bre Banca Lannutti CUNEO of Italy next Wednesday and at the same time needs a loss from POITIERS which is hosting Jihostroj CESKE BUDEJOVICE.

While the 100 or so supporters from Poitiers among the crowd of 1’017 spectators at Generali Sports Arena were celebrating their team, coach Olivier Lecat admitted that “we are in a very good position now”. However, he warned, “we have still one game to play and we have to take one game after another”.

His colleague Mihai Paduretu said, that UNTERHACHING’s chances in the Champions League are “very small” now, “but you never know”.

However, first of all his sights are now set on at least qualifying for the Challenge Round of the 2012 CEV Volleyball Cup, “which is not the Champions League unfortunately”. Paduretu added that POITIERS, which had its best scorer in Jean-Philippe Sol (19 points) “was playing better than us and deserved the win”. In fact, the hosts came out firing on all cylinders.

While UNTERHACHING was struggling to find any rhythm at all the visitors took control of the first set right away. The French were up by three points at 5:2, widened the gap to five points at 8:3 and even to nine points at 22:13. Generali was serving badly, blocking badly and had major trouble to defend POITIERS’ services and to score against the block of the French champion. Points for Paduretu’s side seemed to come only by accident, a versatile POITIERS on the other hand seemed to score at will and in every possible way.

After 22 minutes the hosts had lost the first set, UNTERHACHING looked shaken and it didn’t get better in the second set at first. The still unbeaten leader of the German Bundesliga fell behind again, being down 4:7. That was when things started to change. The hosts were able to finally raise their game, looking much more concentrated, dedicated and like the team that hasn’t lost a single game in national competitions so far. At 8:7 Generali managed to get a lead for the first time in the match and from that point on the set was a very tight affair. Twice UNTERHACHING took a two point lead (10:8, 19:17) but couldn’t hold on. The French were finally able to even things up again at 23:23. A point by Alexander Shafranovich and a miss attack by the Israeli player made it 24:24. Then Christian Dünnes came through, getting two huge points and making it one set all after another 29 minutes.

Set number three started no differently. Both teams continued to fight for every ball and every point, thus staging an immensely intense game. Again, POITIERS took a three-point lead, going up 9:6. Not willing to give up another set and playing with a lot of heart, Generali fought back, finally taking a lead for the first time in the third set at 18:17. Opposite Milos Culafic reclaimed the lead for Stade Poitevin at 21:20. After some thrilling rallies UNTERHACHING, being on the verge of turning things around, made some costly mistakes: Roy Friedrich badly missed what looked like a penalty-kick to give the French the lead at 23:22.

“That is something that shouldn’t happen. That was our big chance”, Paduretu said.

Seconds later Christian Dünnes, who with 22 points was his team’s best scorer, missed at set point.

Forth and fifth set

Now UNTERHACHING really was under a lot of pressure. To keep its slim chance from reaching the Playoffs 12 alive, at least winning the next two sets was a must. With nothing left to lose, Paduretu’s side suddenly got into a groove, basically overpowering POITIERS with fast, versatile attacks and getting a lot of lucky breaks when hitting POITIERS block. The French champion however regrouped and seemed to have saved its best for last. In the tie-break Stade Poitevin constantly made all the big points while UNTERHACHING never looked like it could wrench the victory from its opponent.

CEV CL: Volero added to draw for next stage of Europe’s most elitist competition