CEV CL: Volero added to draw for next stage of Europe’s most elitist competition 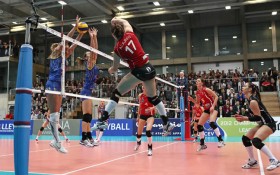 During the last days the question around Volero was if Tijana Malesevic could fill the gap left by missing star Brankica Mihajlovic who was just transferred to South Korean top-team Hyundai Hillstate Volleyball.

However, Malesevic and her team-mates were determined to win this game, no doubt about that, and Modranska held against the Swiss power until the first technical time-out before setter Bojana Zivkovic put the Czech reception into trouble with clever serves. At the same time, the attacking duo Alajbeg/Sazhina scored point after point. In addition, the Swiss tactic – several tips into the middle of the field to destroy the Czech defense – proved to be successful. After a few spectacularly long rallies one of Alajbeg’s power smashes put an end to the first set (25-21).

However, PROSTEJOV was not demoralized and went up 8:7 in the next set. Nice blocks were scored by Petrovic and Alajbeg and no team could go into a clear lead. The game got more and more hectic and the score was tight (19:18 for the guests). Sanja Popovic scored from the back row for Modranska but the answer of Alajbeg (who scored 16 points in total tonight) was even more powerful. At that moment Volero demonstrated great focus and were rewarded with a promising 23:21 lead and a cheering crowd in the sold-out gym. Two aces of Petrovic, who was awarded MVP later on (with 11 points in total), ended this set (25-21).

If the 1’220 spectators thought the game to be over, they were mistaken. PROSTEJOV kept on fighting, the Czech block was all of a sudden tight, and the guest team claimed the lead (11:6). Volero came back to its senses and thanks to two splendid blocks by Petrovic, the hosting team was finally back on track (11:11). The race for each single point continued on both sides. After two blocks of Onyejekwe, the Czech coach was forced to take a time-out (19:17 for Volero) and replace his setter. As the Czech captain stated after the game the flawless defensive abilities of the Volero girls decided this game and finally the set.

The big difference is that Volero had a great defense which is nowadays really important. But still we played better than in the first match, Solange Soares said in the press conference. After a line-up mistake the fighting spirit and field organization of PROSTEJOV seemed to be vanished.

The second match-ball brought the final relief to the Swiss girls who thereby defended the third position that allows them to enter the next round of the Champions League.

“We all had the confidence that we could win, also in the third set although it was a little bit tight. It was just a perfect match” says captain Mandy Wigger.

Helena Horka and Aleksandra Petrovic were awarded as best players of the game.

“I am very satisfied with the girls. Congratulations to them for their performance tonight”, head coach Svetlana Ilic says. “And I am very, very happy about the full gym and the spectacle delivered by both teams. The stress was huge for both sides but especially for us because we had three games in the last 5 days”.

The coach of VK Modranska, Miroslav Cada, added: “We tried everything but Volero displayed a great block and defense system”.