CEV CL: Scavolini takes another straight win to stay atop of Pool E

Pesaro, Italy, January 12, 2012. Italy’s celebrated another win tonight in the prelims of the 2012 CEV Volleyball Champions League – Women as Scavolini PESARO downed Crvena Zvezda BEOGRAD in straight sets (25-23, 25-17, 25-22) to keep the leadership of Pool E after five rounds of action. 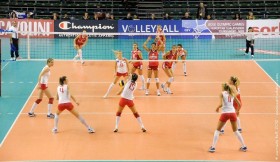 Scavolini takes another straight win to stay atop of Pool E

The match started at a slow pace with a neck-to-neck race unfolding up to the second technical time-out where Scavolini tried to break away but had to cope with the Serbian resistance until the hosts sealed the final 25-23.

Scavolini changed gear in set 2 dominating the scene there and taking it with the comfortable score of 25-17.

The Italians were so dominant that in the second half of the set head coach Luciano Pedullà made some changes to give some playing time to Laura Saccomani and Paola Ampudia.

Serena Ortolani and Alexandra Klineman were back in action for set 3 and even though the guests fought bravely, still Scavolini could finish it in straight sets.

Klineman was named MVP of the match as she paced her side with 16 points including 4 blocks and 1 ace.

“We should have played even better” states coach Pedullà.

“Maybe we have been working a lot these days in the gym and so the players are a bit tired. Anyway we have won the game. We were more focused as we played the first match in Beograd; this time we have been following their rhythm and this influenced the quality of our play”.

“We played a little better than we did in Beograd but still I am not fully satisfied” adds the mentor of Crvena Zvezda Ratko Pavlicevic.

“We made too many mistakes and obviously we shall avoid this even though we are a young team”.

CEV CL: Volley BERGAMO is back on track after splendid win over Azerrail