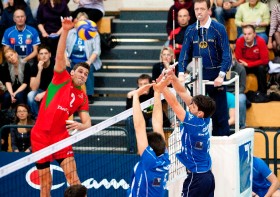 At the start of the game everybody at USI hall in Innsbruck saw a dominating Russian team that very quickly took an 8:2, 16:7 and 21:13 lead to win the first set in only 22 minutes with the score of 25-15.

It didn’t look good for the hosting team and not many people would have guessed what the following 4 sets were all about.

Hypo Tirol INNSBRUCK turned the tables completely, started as a different team in game 2 and caught Lokomotiv by surprise.

8:2 for the team of head coach Stefan Chrtiansky was the Tyrolean response to the first set, which lead to a 25-22 win at the end and tied the game at 1:1.

And the Austrian champions continued playing on a very high level and the whole match became a high class Volleyball fight with again the better end for INNSBRUCK.

Trailing 1:2 Lokomotiv didn’t fold down, fought back and showed great Volleyball under pressure.

The Russians were able to take the fourth set with 25-19 and the tie break had to decide the outcome of the match.

INNSBRUCK took the lead until 10:9, then the hosting team missed a few chances to score and Lokomotiv came back to have their first match points at 14:12.

The first one INNSBRUCK took away but the second one was silvered by a strong attack by middle blocker Artem Volvich and Lokomotiv eventually took the game 3:2.

However, the performance displayed by the Tyroleans was again very good against a European top team.

Head Coach Stefan Chrtiansky says: “We got our first point, which I think we well deserved after the performance we have shown throughout the entire Champions League season.

Also today we played really well, even though I think we relaxed a little bit after winning the second set and thought that Lokomotiv might not come back that strong.

However, they did so and we missed some opportunities to score and so unfortunately we lost a close game at the end.

May be if everybody had kept playing at a 100% we could have even won the whole game.

But we are very satisfied with our performance”.

CEV CL: Scavolini takes another straight win to stay atop of Pool E