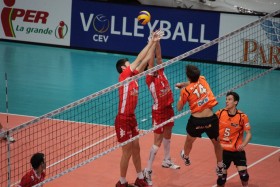 MONZA cruises to straight victory waiting for return in Berlin

The Italians set the tempo in the opening set leading regularly by 1 or 2 points before they clipped the final 25-20.

The supremacy of MONZA was overwhelming in the second set that as sealed with a margin of 13 points.

BERLIN finally showed its quality in the third set but in the end the Italians could celebrate a very important victory in straight sets waiting for the return coming up next week in Germany.

Urpo Sivula, who is playing for BERLIN but spent one season in Monza two years ago, says: “We expected a tough match and so it was. They have a very good team; we did our best and we hope to display a better performance for the return coming up next week. It is an advantage to play the next game in Berlin but we know we will have to play our best from the start up to the end of the match”.

“They are a strong side even though they did not start so well tonight” adds Facundo Conte.

“We easily won the first two sets, then we slowed down a bit in the third but were still able to bring it home. The return won’t be easy at all as we know we have to win there as well, but I think we can do this if we play as we did in the first two sets tonight” says the top scorer with 18 points.