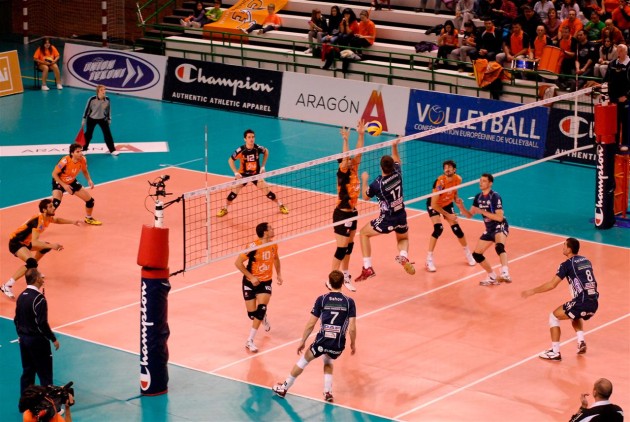 The game started with the guests from Bulgaria imposing their pace (5:11) but with a terrific run of nine consecutive points CAI TERUEL could flip the charts around (14:11). The hosts were still up in the score by the second technical time-out (16:13) but DUPNITSA fought back to 19 all and did also pocket the opening set at the end of a close final rush (26-28).

CAI TERUEL started out strong in set 2 but their opponents could keep the score very close and even went to the front by two or three points. After another very close end, it was CAI TERUEL this time to have the upper hand going for the provisional 1:1 (25-23).
|
The score remained very tight up to the first technical time-out in the third set before DUPNITSA cruised to the front by five points with a series of good blocks. CAI TERUEL adjusted its play in defense and could draw level at 6 all but it did not last long before the guests re-opened the gap and could claim that section of the game (20-25).

Marek Union certainly wanted to bring it home in the fourth set but CAI TERUEL was ready to resist and wanted to prolong the game to the tie-break. The Spaniards eventually did so as they changed gear after the second technical time-out to claim set 4 with a margin of six points (25-19).

CAI TERUEL stretched that momentum also to the early phases of the tie-break and supported by the home crowd played superbly to cruise to the final 15-12 whereby they also got revenge for last week’s defeat in Bulgaria.

“My players are young and inexperienced and this prevented us from winning the game” said Nayden Naydenov, the head coach of Marek Union after the game.

“Even though we did not play our best we are evidently happy with the result” commented home mentor Oscar Novillo.