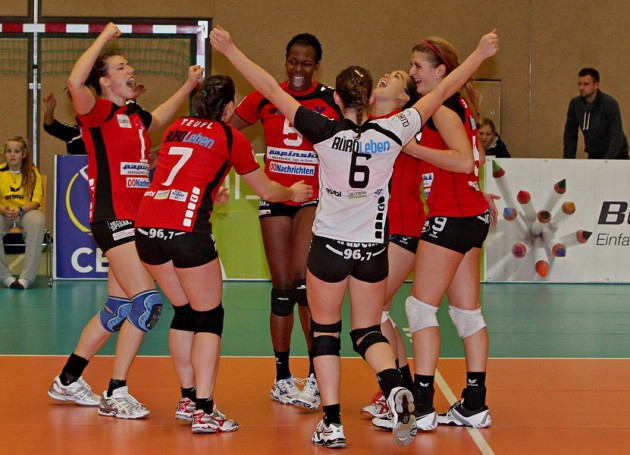 The win marks the first time in Askö BüroLeben LINZ STEG history that the team advances to the 1/4 finals of a European Cup competition. Earlier in the season the team already made history winning their first CEV Volleyball Cup match ever. It was December 2008 the last time the BüroLeben girls had been victorious in CEV play, winning a Challenge Cup match against Croatia’s OSIJEK.
It was to no surprise that the second of these two matches would lead to a five-set thriller. Back in Austria LINZ STEG had captured a five-set win with each set being decided by two points. In Switzerland it was a similar story. “We played as a team tonight” said head coach Jiri Siller. “We stayed together through the good and bad, and that is the main reason that we won. The atmosphere was fantastic; it was great for our players to absorb the energy from the crowd”.

Although it took a set for LINZ to find their rhythm in the sold-out Halle de Sports de la Riveraine of Neuchatel, the consistent and even play of the team eventually paid off. Bouncing back in the second set, it seemed LINZ had taken control of the match for good, taking a decisive 20:13 lead. The run was led by captain Valerie Teufl behind the service line, recording three aces to help her team gain momentum. Sagres NEUCHATEL had different plans in the third, cleaning up their reception play and finding holes in their opponents’ defense. It was in the fourth that LINZ STEG displayed pure determination, winning the match on a big out-of-system kill be Sherisa Livingston. It seemed as that point gave LINZ the confidence they needed in the fifth, but again NEUCHATEL would not give up without a fight. After trading points back-and-forth in the fifth set, the match finally came to a close with a spectacular block by Lauren Barfield.

“It is a great feeling to win” said team captain Valerie Teufl. “There are still things that we need to work on, and it is a positive feeling to know that we can still improve. The match showed that we can and often do get better each set. The feeling in the gym was amazing tonight, the support and atmosphere is exactly what every athlete hopes for”.

The small team, with a roster of just nine players, looks forward to the chance of competing against one of the best teams in the world, Fenerbahce SK ISTANBUL. A large community of Turkish descent resides in Linz, and the club is hopeful for a large turn-out in their next round of play.