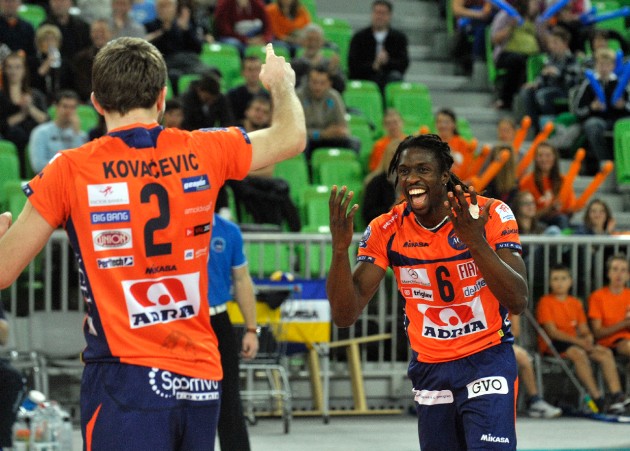 The two teams have witnessed several changes since then. Alen Pajenk, who was in the team of ACH Volley in the 2009/2010 season, is now successfully representing Lube Banca Marche MACERATA. The Italian champion won the first clash in this year’s Champions League very convincingly with a 3:0 (26-24, 25-13, and 25-15), but ACH Volley wants to perform better in front of the home crowd.  While MACERATA is already qualified for the Playoffs 12, ACH Volley is still fighting to attain that goal. It will seek its chance also against the Italian champion.

Alberto Giuliani, head coach Lube Banca Marche MACERATA, says: “We already qualified for the Playoffs, but we want to end the Main Phase in first place. This means we have to score the missing points in this match that we’ll play in Ljubljana. ACH Volley is still running to get the qualification, so it will not be simple to come back to Italy with a victory, even because I know they will have for sure thousands of fans supporting them in the sports hall. We’ll do our best”.

Alen Pajenk, Lube Banca Marche MACERATA: “Regardless of the fact that we are first in Pool D, we won’t come to Ljubljana sure of our victory, because the match can turn either way. I am happy to be able to play in Ljubljana with MACERATA. We want to keep the first position, but we expect a difficult match in front of many fans”.

Natale Monopoli, captain of Lube Banca Marche MACERATA, adds: “ACH Volley is a good team, and is still on the run to qualify for the Playoffs. This means that we will face a very difficult match in Slovenia. It was very important for us to secure a place in the Playoffs by winning the last match against Generali UNTERHACHING, but our final target is to keep the first position in the Pool without losing any match”.

Andrej Flajs, captain of ACH Volley LJUBLJANA, points out: “We played very well in the last two Champions League matches as we didn’t lose a set. The six points were necessary, if we wanted to remain in contention for the Playoffs. Our next opponent is MACERATA, the current Italian champion, which is doing great in the Champions League and the Italian championship. Their lead in Pool D is huge, but I am convinced that we can compete with them in Ljubljana. I believe we can win a set or even more if we remain focused”.

ACH Volley head coach Luka Slabe concludes: “MACERATA has so far justified its role as the pre-favorite in Pool D and for winning the Champions League title as well as the Italian championship. They brought in Dick Kooy from Modena to fill the gap left by the injury of Cristian Savani. It is difficult to prepare for MACERATA, because the team doesn’t have many weaknesses. It is also uncertain which players will be on the court in Stožice hall on Wednesday. MACERATA already qualified for the Playoffs, but they nevertheless want to win three points in Ljubljana as well. We have played good in the last couple of matches and I hope we can show another solid performance also on Wednesday. I want Stožice hall to be full of fans”.

CL M: Zenit KAZAN is not willing to delay qualification to Playoffs 12