CL M: Zenit KAZAN is not willing to delay qualification to Playoffs 12

The leader of Pool A, Zenit KAZAN, will try to secure a ticket to the Playoffs 12 of the 2013 CEV Volleyball Champions League via the home match against VfB FRIEDRICHSHAFEN. Vladimir Alekno commented the game. Yury Berezhko and Alexander Volkov are injured. David Lee will debut. 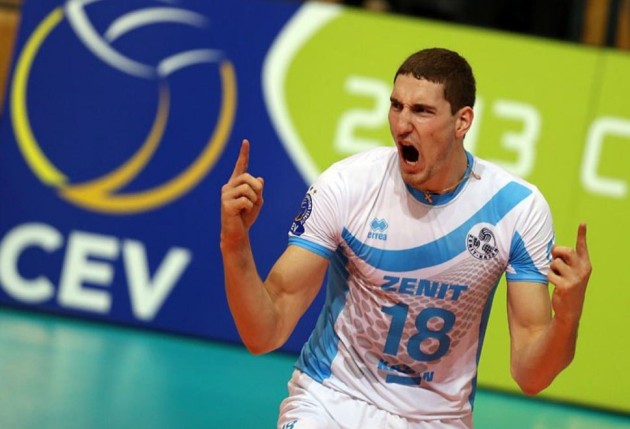 The Russian champion hasn’t lost a single set in the tournament this year and only Italy’s Lube Banca Marche MACERATA can boast such impressive record. The defending champion has to score just one point to seal the group stage.

“If we win on Wednesday, we can send the second team to our last match of the group stage against Knack ROESELARE. It is necessary to keep the leaders safe and sound before the Final Six of the Russian Cup. So that’s why we don’t want to postpone the qualification to the Playoffs” says the head coach of Zenit KAZAN, Vladimir Alekno.

The list of injured players has been expanded recently by spiker Yury Berezhko. Middle-blocker Alexander Volkov has been off the game since the beginning of the season recovering after surgeries. American David Lee who joined Zenit to replace Alexander Volkov will debut in the match against VfB FRIEDRICHSHAFEN.

Zenit KAZAN will play against the German club for the eighth time in its history. The Russian champion has won six times and has been defeated just once. Last weekend Zenit KAZAN outplayed Lokomotiv KHARKIV (3:0) in the away match of the Russian Superleague. The team from Tatarstan is currently ranked second in the standings.

VfB FRIEDRICHSHAFEN is now on the wane. The German team has suffered four defeats in their last six matches. Before coming to Kazan, the team from the Lake of Constance sensationally lost in the quarterfinals of the German Cup, but last weekend gained revenge over evivo DÜREN in the Bundesliga.