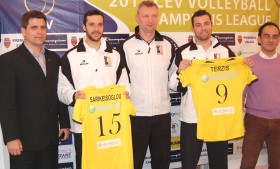 The Romanian team will face the Belgian rookies from Euphony ASSE-LENNIK in a game that arouses interest and that will sure be a delight for the numerous fans who are supposed to come to support their favorite team.

After starting off on the right foot in the second part of the national league, Remat wants to bring luck on its side also in the European Cups, by stopping a series of defeats with a home victory against the Belgians.

The Romanian champions made a few changes in the line-up, ending in December the collaboration with Michal Sladecek, Leonardo Dos Santos and Gjoko Josifov, and signing two players from the Greek league, Athanasios Terzis and Michael Sarikeisoglou.

The new players seem to be optimistic before the match.

Athanasios Terzis praised the group saying that “Remat ZALAU is a team with great potential, having good mentors and valuable players. This is the reason why I think that we can reach our target. Zalau is a small town but it has many Volleyball fans, so we definitely want to reward them with a home victory”.

Michael Sarikeisoglou shared the same opinion, adding that “a win would boost the self-confidence of the team, which has a major importance in continuing our campaign in the European Cups. We will play hardball in Baia Mare”.

Despite having the advantage of playing on home ground, Remat admits that Euphony ASSE-LENNIK is a strong opponent, which put in trouble even powerful teams, like Zenit KAZAN and VfB FRIEDRICHSHAFEN.

However, Mariusz Sordyl, the head coach of Remat ZALAU said that “Our goal is to play well and to win this match, as we want to continue our adventure in the European competitions. The team functions well and we have continuously improved our skills. The Greek players seem to have been integrated into the team even though they have been here only for five days”.

“We are looking forward to this match which I think will be a balanced one, both teams being quite similar. As this is the last match of Remat in the prelim of 2012 CEV Volleyball Champions League, we want to take advantage and fight to achieve our objective”.

Germany: Generali UNTERHACHING hopes for two wins in one night