Germany: Generali UNTERHACHING hopes for two wins in one night

Munich, Germany, January 16, 2012. Though the chances are somewhat theoretical Generali UNTERHACHING hasn’t given up hope to reach the Playoffs 12 in the 2012 CEV Volleyball Champions League. 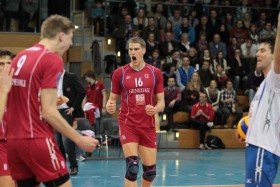 Generali UNTERHACHING hopes for two wins in one night

All the Germans need is two convincing victories on Wednesday as they play Bre Banca Lannutti CUNEO in Italy and Jihostroj CESKE BUDEJOVICE takes on Stade Poitevin POITIERS in France.

Actually, it doesn’t need a rocket scientist to do the math for Generali UNTERHACHING on the last day of prelim Pool D in the 2012 CEV Volleyball Champions League.

On Wednesday the Germans need to win at already qualified Bre Banca Lannutti CUNEO to open up the door to the Playoffs 12.

However, they don’t have their fate in their own hands even then: to climb up to second place and step through the door the team from Bavaria needs a second victory that night – that one coming off the hands of Jihostroj CESKE BUDEJOVICE versus Stade Poitevin POITIERS.

Right now POITIERS has a firm hold on second place followed by UNTERHACHING with six points and CESKE BUDEJOVICE with four.

There is a little twist to the situation: UNTERHACHING still could sneak through the back door into the knockout-round as the best third-placed team of the prelims.

That seems to be a long shot, for Iraklis THESSALONIKI of prelim Pool A has collected eight points already.

To add two more “ifs” to the situation: should UNTERHACHING lose to CUNEO they would then need POITIERS to beat CESKE BUDEJOVICE accordingly to at least reach the Challenge Round of the 2012 CEV Volleyball Cup.

Otherwise, Generali would be in danger of having to wave good-bye to European competitions for this season.

Oh, and there is still the rule that the worst of the third-placed teams of the prelims will be eliminated alongside the fourth ranked teams.

Maybe UNTERHACHING does need a rocket scientist after all.

The three-time defending German cup winner doesn’t want to any math and simply hopes for nothing short of a miracle.

“We want to keep on playing in the Champions League, of course; otherwise we could skip the flight to Cuneo. We will try everything to make the impossible possible”, captain Max Günthör says.

That is seconded by head coach Mihai Paduretu: “We want to advance to the next round even if our chances are very slim. All we can do is to win in Italy and hope, though it possibly doesn’t work out”, he says.

While trying to catch a last straw to reach the Playoffs 12, Generali UNTERHACHING ponders the question why they have shown two faces all season long so far.

The “German face” makes you look at a team that hasn’t lost a single match in national competition so far: Generali has 15 victories in as many matches in the Bundesliga and has reached the Cup final for a fourth consecutive time.

Then there is the “European face” that mirrors a team on the brink of elimination in the Champions League.

“Maybe we wanted too much”, captain Günthör says.

“We’re missing only some details, but in every match we have left behind at least one point”, Christian Dünnes (see picture, middle) adds.

All things aside now it is the time for Generali UNTERHACHING to show its German face also in Europe.

He wants his team to concentrate on itself.

“We don’t want to know what happens in Poitiers while we are playing. We have to do our own thing”.

After that, everything else would be a perfect gift for Paduretu as he turns 45 on Wednesday.

CEV CL: CSKA SOFIA ready to challenge the leader of Pool A