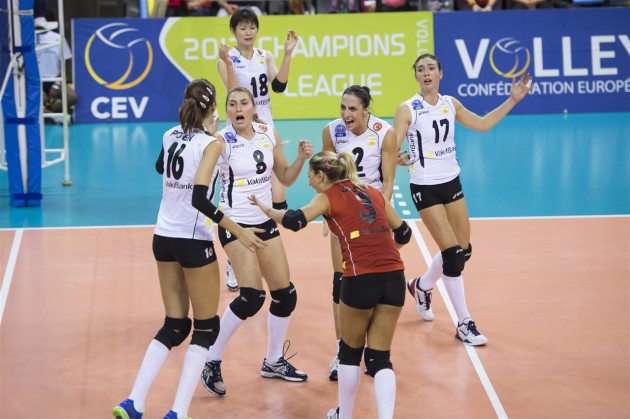 As per the official regulations, the first and second-ranked teams of each preliminary Pool got the right to continue their quest for glory that will resume in mid-January after the traditional Christmas break. The teams qualified for the Playoffs 12 are: Vakifbank Istanbul (TUR) and RC CANNES (FRA) from Pool A; Rabita BAKU (AZE) and Atom Trefl SOPOT (POL) from Pool B; Galatasaray Daikin ISTANBUL (TUR) and Unendo Yamamay BUSTO ARSIZIO (ITA) from Pool C; Eczacibasi VitrA ISTANBUL (TUR) and Azerrail BAKU (AZE) coming from Pool D; Dinamo KAZAN (RUS) and SCHWERINER SC (GER) that ended up first and second respectively in Pool E plus Lokomotiv BAKU (AZE) and Dinamo MOSCOW (RUS) from Pool F.

Since one of the above teams will qualify directly for the final four as organizer, its spot will be taken by the third-ranked team with the best score, i.e. Italy’s AsystelCarnaghi VILLA CORTESE that claimed the same points – nine – of Bank BPS Fakro MUSZYNA, but the tie is broken by the three wins scored by the players around head coach Gianni Caprara vs. only two for Poland’s vice champions.

As for the DOL, this will be performed according to the following principles:

– Team stemming from the same prelim Pool won’t cross their ways in the Playoffs 12;

– Maximum two teams from the same country – including the eventual organizer – can make it to the final four;

– As far as possible, a certain advantage will be granted to the teams that have finished the prelims in first place and that will play the return match and eventual golden set at home.

Four more teams – Uralochka-NTMK EKATERINBURG, Tauron MKS DABROWA GORNICZA, 2004 Tomis CONSTANTA and Bank BPS Fakro MUSZYNA – will continue their European adventure in the Challenge Round of the 2013 CEV Volleyball Cup whose pairings will be also announced on Thursday.