Unendo Yamamay BUSTO ARSIZIO cemented its second place in the final standings of Pool C by scoring a 3:0 home win in the last round of play against Dinamo Romprest BUCURESTI. Read the latest news from volleyball world on worldofvolley.com. 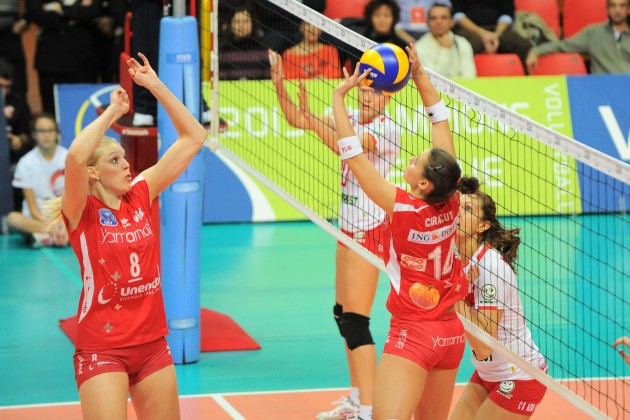 As Galatasaray had edged MULHOUSE earlier in the evening, Yamamay knew the first place in the standings of the Pool was already gone and although they were already qualified for the next phase, the home heroines started with half of their usual starting six, as Maren Brinker, Giulia Pisani and Valeria Caracuta joined the game for Juliann Faucette, Carli Lloyd and Valentina Arrighetti. The local side got some resistance only in the second set with Francesca Marcon scoring 13 points and Pisani contributing five blocks. The guests were paced by Regan Hood and their captain Alida Marcovici with 13 and 12 points respectively.

After a difficult start (0:4), Yamamay dominated the scene in the first set helped by 14 errors made by Dinamo Romprest. Yamamay had to resist to two set balls for Dinamo in the second set as the guests were well anchored by Marcovici (9 points in this section of the game) and Smarandache. However, Margareta Kozuch and Marcon responded well and a block by Pisani sealed the 26-24 that meant the provisional 2:0. The third set was really one-sided with Marcon and Brinker standing out in offense and Pisani solid as a rock in blocking.

“We played as we are capable to do and we are happy for making it to the Playoffs 12. Still I think that the best is yet to come. Personally I am happy with my own performance after I did not play so well in the last round of the national league with VILLA CORTESE on Saturday” said Francesca Marcon after the game.