Atom Trefl SOPOT qualified for the Playoffs 12 of the 2013 CEV Volleyball Champions League by scoring a 3:0 home win in the last round of the prelims as they were hosting AsystelCarnaghi VILLA CORTESE. Read the latest news from volleyball world on worldofvolley.com. 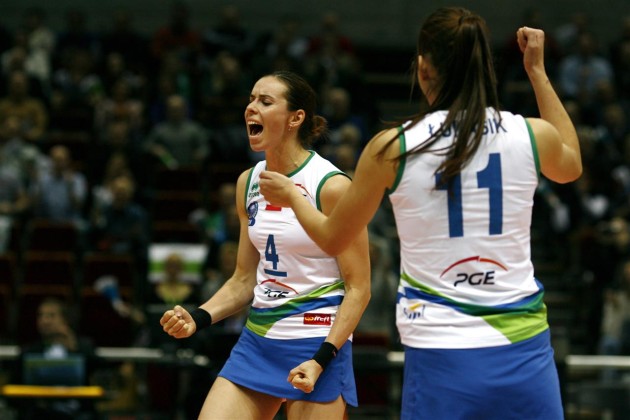 The first set was extremely close with the teams playing point for point until 15:15 before two consecutive aces by Rachel Rourke gave a four-point advantage to the home team. In the end of the set there were two errors from the serving line for the guests from Italy and SOPOT went for the final 25-21. VILLA CORTESE caught a good start in the second set and claimed a margin of 2 points that was maintained up to 10:12. After the second technical time-out Atom Trefl got a margin of four (20:16). Coach Caprara did two changes – Sanja Malagurski for Caterina Bosetti while Natalia Viganò replaced Alexandra Klineman, but the home team played superbly gaining the second set (25-18).

The beginning of the third set was completely dominated by the home team (11:4). Three good services by Erika Coimbra, two defenses by libero Mariola Zenik and a service error of Katarina Batun moved the score up to 15:8 for the hosts. Anna Podolec replaced Erika Coimbra and at the second technical time-out the score stood at 16:9 for SOPOT. The home team sailed confidently away (21:11) to go for a well-deserved 3:0 cashing a massive 25-15 to pocket its pass for the Playoffs 12.

Italian head coach Gianni Caprara said: “Atom Trefl SOPOT deserved this win, because they played better than we did tonight, that’s all”.

Home mentor Adam Grabowski: “It was our best match. Who came to see us knows it. Who did not will have some regrets”.