Russia’s Lokomotiv NOVOSIBIRSK finished its campaign in the prelims of the 2013 CEV Volleyball Champions League – Men by scoring a fifth win out of six matches. The guys from Siberia’s largest city edged Budvanska Rivijera BUDVA of Montenegro. Read latest volleyball news on Worldofvolley.com. 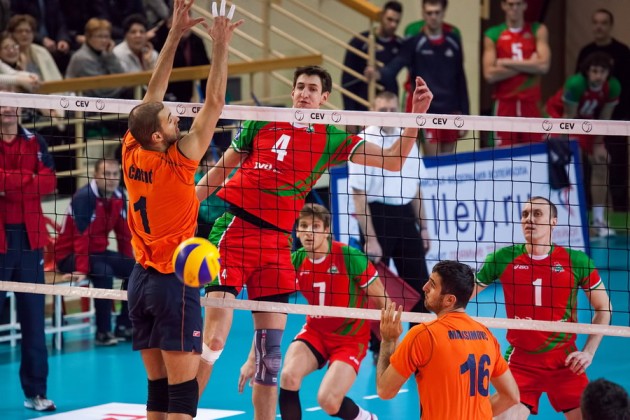 On Wednesday, as they pocketed first place in Pool B and so also a spot in the Playoffs 12, the guys from Siberia’s largest city edged Budvanska Rivijera BUDVA of Montenegro in straight sets (25-22, 25-15, and 29-27).

With -32 °C outside and a jet lag of six hours, the guests from Montenegro certainly had their own share of problems to find their rhythm in the early phases of the match. However, the hosts also looked a little conservative but eventually cashed the opening set with the score of 25-22.

Lokomotiv asserted its absolute supremacy in the second set moving up 8:3 by the first technical time-out, scoring 6 blocks and attacking with outstanding efficiency (70%) along the way to a quite massive 25-15.

Budvanska Rivijera still showed great determination in the third set and fought bravely to change the course of the game. The guests enjoyed a very good margin at both technical time-outs (4:8 and 10:16), before Lokomotiv stormed back to call for a close final rush. There the teams started making quite many substitutions and in the end it was Lokomotiv to have the upper hand to finish it off in straight sets (29-27).

“It was a tough game especially since our opponents had nothing to lose” says Lokomotiv setter and 2012 Olympic champion Alexander Butko. “They did not feel any pressure and were free to play their best. I would like to thank our fans who were not afraid of the temperature and came to the sports hall to cheer on us”.