Russia and reunified Germany lined up under new names for the first time at the 1994 FIVB Volleyball World Championships, but attention focused elsewhere. In the ladies’ tournament, the legendary “Las Morenas del Caribe” from Cuba upstaged all the other teams at the showdown in Brazil, courtesy of a combination of incredible strength and skill. 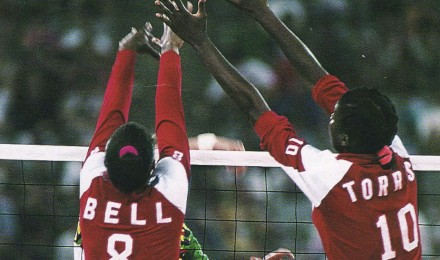 Six perfect matches, all won in three sets, earned Cuba the title of World Champions for the second time after the surprise gold medal in 1978. With legends Mireya Luis, Regla Torres, Regla Bell, Magaly Carvajal, Marienys Costa and Lilian Izquierdo regularly on court, head coach Eugenio George brought perhaps the strongest team in the history of women’s volleyball to Brazil. There was no hope even for the excellent home team, which was outclassed 0-3 in the final, despite vibrant support from the Brazilian crowd.

The new stars from the Caribbean also picked up the most individual awards at the end of the competition – Regla Torres was named MVP and best blocker, while Mireya Luis, who appeared to have springs in her feet, was the best hitter.

The men’s championship, which was held in Greece for the first time in its history, was a much closer affair. In the end, the Italians, who had surprisingly crashed out at the quarterfinal stage of the 1992 Olympic Games in Barcelona, were able to defend their title. Just as they did when they won their first gold medal in 1990, the Azzurri made a poor start, including a 2-3 defeat to Japan. The Italians, led by Lorenzo Bernardi, gathered momentum as the final round progressed, however, easily beating hosts Greece and earning successive 3-1 victories over Russia, Cuba and then the Netherlands in the final.

Italian star Andrea Giani recalled: “You never start a tournament expecting to win gold, but out of our three titles this one was the most anticipated. Since the start of our golden era in 1989, we had recorded a series of major successes, including two gold medals and one silver at the European Championships, and we wanted to fight back after a disappointing Olympic campaign in Barcelona.”

“Velasco had added some new players to the group – Papi, Giretto, and Pippi – and there I recall an interesting anecdote. I started the tournament playing as opposite while Zorzi was one of our middle-blockers, but for the final match we switched our roles again. I don’t know how many players could do the same nowadays. Actually, there is one who did so at the 2012 London Olympics, and he eventually brought gold to his team: that was Dmitriy Muserskiy.”

Enhance Your Talent and Achieve Your Goals:...