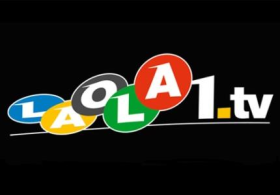 The FIVB World Grand Prix and CEV European League Final Rounds are the major highlights this week on LAOLA1.tv, the Internet Sports TV and Home of Volleyball.

The FIVB Beach Volleyball World Cup is also a huge attraction for fans that prefer their volleyball played on sand. All events will be available LIVE and FREE via LIVE-Stream on www.laola1.tv as well as On Demand.

Twitter users can now keep up with breaking news and discuss these top events via the exclusive LAOLA1.tv Twitterwall here: http://bit.ly/M852nK #sovb

The FIVB World Grand Prix reaches the deciding phases and the best of the action will be available to watch LIVE and FREE on FIVB WEB TV powered by LAOLA1.tv. USA, Thailand, China, Turkey, Cuba and Brazil will take part in the final round. USA remain the favourites as they look to win their 3rd title in a row but it will not be easy with many world class teams ready to take them to the limit.

A big weekend is in store for men’s European Volleyball as the CEV European League Final Round takes place and the European Champion will be crowned. LAOLA1.tv will be showing all of the matches as Turkey, Slovakia, Spain and Netherlands compete for the European prize. The women’s tournament also continues with selected matches shown LIVE and FREE on www.laola1.tv

The first ever FIVB Beach Volleyball World Cup Olympic Qualification tournament will be held in Moscow with 12 nations looking to take advantage of the final chance to be in London this year for the Olympics. LAOLA1.tv will be bringing fans the best of the action throughout the tournament on www.laola1.tv and FIVB WEB TV powered by LAOLA1.tv.

The CEV Champions League will once again be broadcast on www.laola1.tv next season and as always the drawing of lots will be available to watch via LIVE-Stream. Find out which teams will face other this year in the strongest club volleyball event in the world on LAOLA1.tv!

Selected matches from the FIVB World League will be shown LIVE and On Demand on FIVB WEB TV powered by LAOLA1.tv. This week’s matches see Serbia take on the Cuba and USA vs France amongst others. For full information please see FIVB WEB TV.

Follow the Summer of Volleyball on LAOLA1.tv with the best LIVE and On Demand coverage of major European and World events such as the CEV European League, FIVB World Tour, World League and World Grand Prix as well as indoor and beach youth events.