According to the president Giovanni Rebecchi, the center Laura Nicolini and young Estonian Anna Kajalina have confirmed to stay in Nordmeccanica. 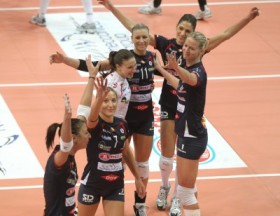 “At the moment I would say that these two players will join the team next season, “ said Giovanni.

Piacenza seems determined to confirm the opposite Carmen Turlea and the center Manuela Leggeri, although it is still negotiating about their staying. The most frequent rumors are about the leaving of the American libero, Nicole Davis, and the coming of Sirressi (Urbino). Rebecchi noted: “Sirressi is certainly a great player, but she is not the only one and the decision has not yet been taken.”

According to the rumors, the team expects Enrica Merlo and most likely the talented Alessia Gennari and Francesca Piccinini.  However, the president Rebecchi is still uncertain about that, because the club is oriented to the foreign markets. It seems that the society of Piacenza has requested information for the Italian Lucia Bosetti (Villa Cortese) and Francesca Ferretti who will come to play as a setter (the situation of Stefania Dall’Igna is not yet defined). As for the coach of the team, it is obvious that Riccardo Marchesi will continue leading the team in the new season.