I will start my blog with an assessment of the FIVB Men's Club World Championship which will take place in Poland on December 12-17.

There will be a huge competition in all matches in Poland. I will try to explain the details regarding volleyball matches that we will watch and which will include great clubs and several individual prizes.

There will be a total of 8 teams from three different continents, and these teams will be separated into two pools of four. The top two teams from each pool will advance to the semifinals. I need to explain how these teams were selected to participate in the tournament: 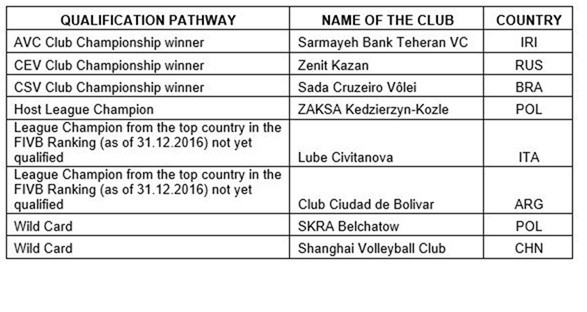 By looking at the names of the teams, I think that more competitive games will be played in Pool A. The quality of the teams in Pool A is equal so it’s very hard to make an estimate. On the other hand, I can say for sure that Zenit Kazan will finish Pool B in the first place. In the last two years, Zenit Kazan lost to Sada Cruzeiro Vôlei but this time, my favorites are Zenit.

After a long break, (from 1992) the championship started again in 2009. In the period of the last eight years, an Italian club Diatec Trentino was the champion four times, but this year they failed to qualify to the tournament because they had a very bad performance in the national league.

I also must say that the tournament will be held in Europe for the first time since 1992. From 2009, when it was renewed, the tournament was held in Qatar and in Brazil four times each. But, if you ask me, it is better that every year a different country organizes it. This way the volleyball will benefit the most in terms of being promoted better in the world. It is good news that the matches of this year’s tournament will be played in three different cities in Poland.

I think that this time the stands will be packed as well.

Match broadcasts should be published without (any) problem.

I plan to publish a more detailed article about the teams.

You can follow the developments on the tournament here.

NSSF KAVC International Tournament Kicks Off: How Did...

Different Variations of Games You Can Play with...

Best Volleyball Teams of All Time

How to Bet on Volleyball Games