Bojana Milenkovic – “At the beginning, I was not aware of anything”

Bojana Milenkovic is one of the players who simply was unlucky. An injury prevented her to be with her teammates in the final stage in Yokohama. 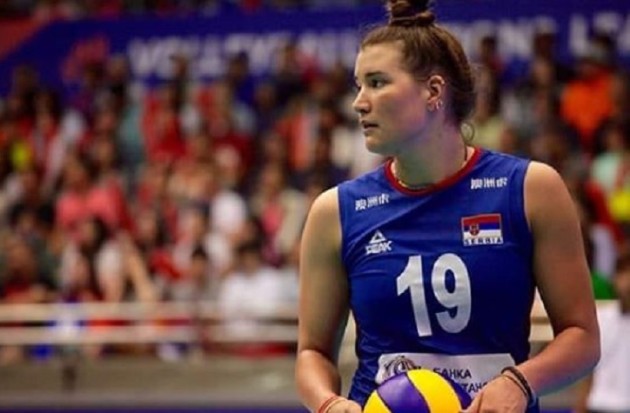 The Serbian outside hitter suffered an injury during the game against Puerto Rico and she had to leave Japan to go for additional exams. It was the end for her and a huge blow for the Serbian national team.

Serbia won the World Championship and her teammates gave her a huge support by holding her jersey after the final game against Italy.

Bojana, what is the current situation regarding the injury? How’s your recovery going?

„I’ve started with the rehab and recovery period in Italy and it’s getting better and better.“

When you will come back to the court, what are the prognosis of the medical team?

„I think it’s difficult to say when I will get back on the court because it depends on the person. Since I want to play so bad, I hope I will get back as soon as possible.“

Let’s get back to the World Championship. You used the opportunity that Terzic gave you, especially during the game against Kazakhstan when you had a good display in the attack, scoring 10 points (11/9). What were you thinking about in those moments?

„Like every other player, I like when I am on the court, playing volleyball, doing all the good things for the team. I waited for the chance and after I got it, I gave my maximum and I think it paid off.“

In the next game, the worst possible scenario for you and staff happened. You suffered an injury, while you were getting into the rhythm, becoming also a member of starting line-up. Have you thought about something in these difficult moments?

„At the beginning, I was not aware of anything, however, after a few minutes, I wanted to see my injury behind me so I can continue the game. Unfortunately, that was not the case…“

Teammates and players from Puerto Rico gave you a huge support. How did you feel, seeing all those girls giving you a support?

„Support is so important in such a difficult moment. It’s something you need and I must say, it meant so much to me. It says that volleyball is much more than a sport. I appreciate that move.“

You continued following your team that managed to win the World Championship title in Yokohama, giving you a great support after the game. Have this picture made your mood better?

„It was so emotional for me, I was celebrating with my sister Katarina just like I was there in Japan. Thanks to my roommate Teodora Pusic and the rest of the team, they made me feel like I was there, taking part in the final match. I was standing up and singing the anthem with them.“

Can you reveal the secret to success of the Serbian national team?

„Except the unbelievable character that this team has, the key to success is a good atmosphere, positive energy and great teamwork.“

What was the reaction of your team in this situation?

„From the beginning, the club is with me, giving me a huge support and everything I need. They are amazing people, I am grateful to them, it’s a big family.“

What have you learned from all of this?

„There is some intelligence that says „The God gives a man as much as he can endure.“ This is a sport, it is difficult now but I have lovely people around me, with whom I am getting over this situation. When I add my smile, positive energy, everything is better and the days are passing faster.“

ITA M: Fernando Hernandez with the best scoring performance in the third round