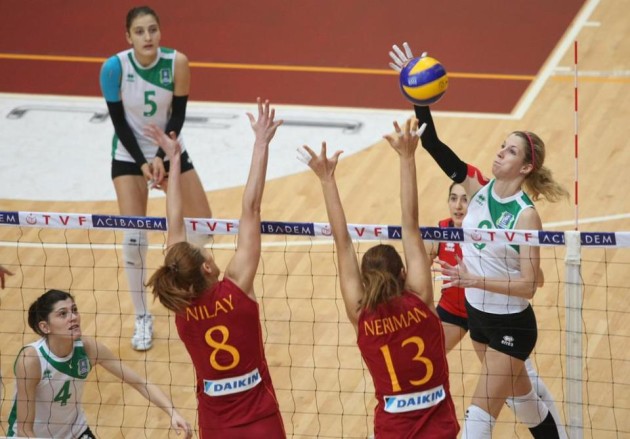 Leap over the stars

“I quickly adjust to my team-mates, their style of play. The fact that I’m the most effective player of the championship, is just the result of good team effort, and mostly thanks to the brilliant Brazilian, a setter who joined us later, but we very quickly “found” ourselves” Mia Jerkov reveals a part of the “secret“.

Many think that it is very hard when you score 30 or more points every match, and these matches happen almost every week. However, for the former and successful Berkeley University student, nothing is difficult.

“I enjoy playing volleyball, and today there are few who have the opportunity to do what they love and that they are well paid for it. I am satisfied, I have the respect from people from the club and the fans, I am also happy with my game.“

This Turkish league season is nearing its end, and the best scorer always has the greatest “demand” on the volleyball market. Mia Jerkov must already have a lot of offers on her table. According to some rumors, the biggest Turkish teams would be very happy to see her in their ranks.

“Bursa enabled me to accomplish all of this, and they must take the credit. Also, we did not have even a slightest disagreement so far, everything has been great, so I think it’s right to talk to them first. Then come the rest. We will see, I am not in a hurry” the girl who made a one year “time – out” said, a time out that hasn’t affected her game.

Wherever she played, Mia Jerkov has left a deep mark and upon leaving the clubs, she was also leaving a lot of friends. That was the case when she played for Uralochka, during the glorious times of the club, it was the same while she was playing in Italy, and Korea last year, when she dominated the same way as she does now in Turkey.

“I think it’s thanks to the clubs, but also to me. In my career I came across good clubs, with people who knew what they wanted. That’s why I have so many friends around the world. Volleyball is my life and I am dedicated fully. During the summer I like to relax and enjoy myself to “fill my batteries” for the next year” Mia Jerkov concluded with a smile.

At the end of each year, it is said that she played her best season. And every year she finishes being better than the last. This may be the reason that many teams want to see her in their ranks next year.

Check out our After sport’s career section, every Thrusday a new story, next time read about John McEnroe: ‘Attila the Hun’ of tennis.

Artur Popko – “Final was filled with...

Elitsa Vasileva for WoV: “If we play...