Apostolos Oikonomou, together with Takis Floros will sit on the bench of Greek Star's Champion All Star Day as a coach , gave an interview for the organization in Lefkada and the Greek women's volleyball. 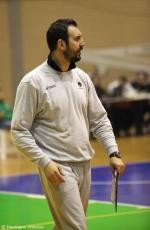 Mr. Economou, the festival of volleyball for the first time this year will be in the province. What do you think how much is important to highlight and promote the sport in the All Star Day, held this year in Lefkas?

I feel it very important and good decision of the federation to start with a decentralization of events that began last year and continues this year with the All Star Day and also the finnish of the Greek Cup Women. Through such an initiatives the volleyball association should assist areas that are rich racing performances and to give them the incentive to deal systematically with our sport. The more we involve the province, so the ball will be the benefit to our athletes.

Have you ever visited Lefkada before?

I have visited very early in my childhood, although if I am not making mistake, we had gone a family holiday in Agios Nikitas. I had made a terrible impression of the quality of the beaches of the Ionian Sea, and I always wanted to revisit them.

Goals of your team, and personal?

The objectives set by management of AEK in partnership with the technical team and the players is to continue the effort that began 3 years ago to achieve the team to have a role in the Greek area, this year it automatically translates into fact the team FC AEK try through participation in domestic competitions to win the Double. As far as my personal goals at this stage, I can only identify them with the ultimate goals of my team.

You are one of the new coaches. What is your view on the level of this year’s championship women’s A1 and younger? Is it becoming better from last year?

Indeed this year is no secret that not only the level of the A1 league and women of other classes are not in the higher scale, but I think if we look at our own country and our own society will understand that the level of volleyball and sport in general is identical to the standard of living of our country and our society. Of course we may have lost to sight but should not murmur because of the fact that the Greek volleyball can come out as a  winner. It is an opportunity for groups now can not afford large sums for the arrival of foreign players are able to provide a much of their budget to be reformed and operate the schools. I am very pleased to see more and more young Greek girls have a key role in their teams and it makes me feel optimistic about the future.

The National Team can accomplish things?

We know that the course and the level of the national team in recent years is what it should be, but the recent success of girls in European National Championships and National Junior Balkan is giving us the right to be optimistic. “SYSTEM PLAN” – on which  the federation will invest organizational and economic resources and will be supported not only by the relevant federal coaches, but from the whole institution called Greek Women’s volleyball.

Do you think they are right who believe that AEK is the first choice for the championship?

Most of us first give the reason for the championship first seeing the budget of our team. From my side, as a coach, I accept our role as favorite believing in the material I have. I think we have very good players who, through their daily workouts are not only improving their talents, but also their mental qualities, and also you need to create a championship team.

As part of the A1 championship, there are many teams from Athens and Thessaloniki. What do you think about the provincial women’s volleyball?

I am from Larissa and my career as a coach started from the E.A.LARISAS so I know what it’s like working in a provincial team. First, it is very regrettable that there is no provincial team in the A1 and I believe it will be the first and the last time. The provincial volleyball is second to no good players or coaches, if you look in recent years the province is the main feeder of the smaller ethnic groups.

make a provincial team can not compete with a group of primarily Athens and Thessaloniki later. But if you want to build our volleyball over again, the federation must help the province and provide material incentives to the clubs.

The island was the only place in our country that had so long ago volleyball team. What message would you like to send the new kids on the island of Lefkada and why to engage in volleyball?

The volleyball and sport in general gives tremendous benefits to a child. What could I say to young kids is just: Leave the computer, the playstasion and mobile, get a ball and play a lot with your friends initially and from there go to the stadium, in a pool and work out and feel the same emotions players of All Star Day feel, the joy to play volleyball.

What message would you like to send to the fans and of Lefkada in western Greece in view of the Women’s All Star Day on February 19?

It is truly a beautiful sight and we want parents, not only of Lefkada but also from western Greece, to take their children and come to experience the sport of volleyball and talk with the athletes in person.