Lausanne, Switzerland, February 15, 2012 – Stacy Sykora has revealed her intentions of making USA’s London 2012 Olympic squad almost a year after a bus accident put her in a coma for three days. 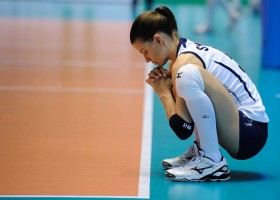 The Best Libero at the FIVB Volleyball Women’s World Championship 2010 suffered serious injuries on April 12 when travelling with Brazilian club Volei Futuro. She spent 36 days in hospital before returning to the US to continue her recovery.

But now she says she is in a better mental place than she was before the accident, and is back with Futuro for the immediate future, although that hasn’t stopped her mind wandering to London and a second Olympic Games this summer.

“I’ll be there [with Volei Futuro] until I make the team or I don’t make the team,” said the 2008 Beijing silver medallist in an interview with ESPN. “First and foremost, it’s about the team. Do I want to go? Yes. But I have to see how I work with this team. There are some great liberos who are fighting for the same position. I don’t want [the accident] to be for me or against me. Regardless of what happens with me, it’s going to be a great USA team.”

The 35-year-old spent most of last summer at Casa Colina in California, a centre which specializes in brain injuries, as well as at the US training centre in Anaheim. It was the latter, or more specifically, her fellow team mates, that helped boost her recovery.

“They proved to me how important they’ve always been,” Sykora said of the rest of her team. “They helped me go from a one to a nine.”

But despite that help, frustration still set in from time to time Sykora revealed.

“I hope I get to 100 per cent, but I’m content with where I’m at. I’m only focused on today. I don’t look to the future at all. The only thing that matters, the only thing I have every day, is 24 hours to do everything I can,” she concluded.

ITA M: Paolucci: “No problem at all, you’ll see after the break”

Elena Litovchenko for WoV – “We gave...

INTERVIEW: Anastasi – “Reception is the key...