Zenit Kazan has opportunity to win Russian championship and CEV Championship league. In each competition, the team from Kazan will have to outplay Belogorie BELGOROD. 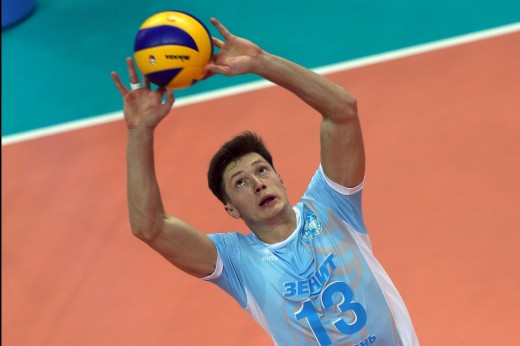 Among the players who have started leaving their mark this year – Zenit currently tops the charts of the highly competitive Russian Superleague – there is a young setter, Igor Kobzar, whom we will get to know in this interview.

This is Igor’s first season with Zenit KAZAN, a team whose roster includes some of the world’s finest volleyball players.

“Zenit has many outstanding players and the team always fights to win every competition we enter” the 22-year old points out. “I can only say that we have excellent conditions here in Kazan: we have a brand new venue where we play all of our home matches, there is good infrastructure and we are supported in the best way. We always travel to our away matches with a team journalist, a TV crew, and we also have our own official photographer. This is something I have never seen anywhere else but this way we can promote the team very extensively and get more and more fans.”

After Lukasz Zygadlo’s injury shortly before the start of the season, Zenit KAZAN signed Serbia’s volleyball legend Nikola Grbic, who left Italy after almost 20 years to embark on his first season in Russia’s Superleague. Grbic is certainly the perfect role model to look at for a young and talented setter like Igor.

“I can say we only have a working relationship with Nikola” Igor admits. “We do not have a very close interaction with him, probably because there is a generation gap. As we train, we are competitors, and I obviously try to play better than he does even though I owe him a lot of respect for his experience and the quality of his game”.

“These matches with foreign teams are very interesting, even more than those we play in Russia, especially if you get to play teams from Poland and Italy. In these countries people are literally fond of volleyball, so it is a great pleasure even to play away and before their fans. The Champions League is not only a diversion from your ordinary routine; it is also a unique opportunity to see where you stand as you play some of the best teams in the world”.

Zenit lost in straight sets to Belogorie BELGOROD in the semis of the Russian Cup played in late January and now these teams will be crossing their ways once more in Ankara, looking for a spot in the final match of the 2014 CEV DenizBank Volleyball Champions League.

Is there any lesson to take from that game in order to edge past the stellar side around Dmitriy Muserskiy and Georgy Grozer?

“Our team has great potential and we simply need to unleash it” Kobzar says. “I hope that in Ankara we will be able to show what we are capable of. If we serve strong, we will stand a chance. As for Belogorie, I can only say that last year I played for them and there is a very good ambiance in their team, mainly due to their captain Sergey Tetyukhin. I am very happy that I could play with this real volleyball legend and that was a priceless experience for a young player like me”.

Kobzar started playing volleyball at a very young age, inspired by his parents:

“They both are volleyball coaches, so by the time I was only five I was already running around with a ball. I also followed my father’s work and so could progress quite rapidly. I debuted in the Russian Superleague at the age of 16, playing for Gazprom-Ugra SURGUT, where my father was working as assistant coach. I have been working hard all the way through the senior level, with the team as well as individually at home. There was constant pressure on me because I did not want to upset my father”.

Zenit always sets very high goals and at the beginning of the season the club’s management announced they wanted to win every competition the team was set to enter. This may be a difficult task to cope with, especially since the domestic competition in Russia is very tough.

“It is sometimes difficult to play for Zenit because people expect from you that you will win every game you play. Sometimes this pressure interferes with the game but, on the other hand, we will never loosen up. I do not want to make any predictions. I can only say that the team will fight to win each game”.

Looking ahead, what stands on top of Igor’s wishes for his career in volleyball?

“Of course I want to be successful in this sport. Right now it is difficult for me to get a place in the starting six because of Grbic but I am trying to exploit every single chance as soon as I am given the opportunity to play. In 2012 I debuted with the Russian national team and my plan is to come back and wear again the jersey of the “sbornaya” as we call it. Of course, I would like, one day, to emulate my countrymen who won gold at the London Olympics coming back from two sets down. That final with Brazil is something that Russian people will never forget”.

PHOTO OF THE DAY: Look where Atanasijević sleeps