Usually the journalists are tall less than 185 cm and they are usually always in a hurry, writing something. As we like to say “their heads are on the table”…but when Andrea Zorzi shows up, everything stops. 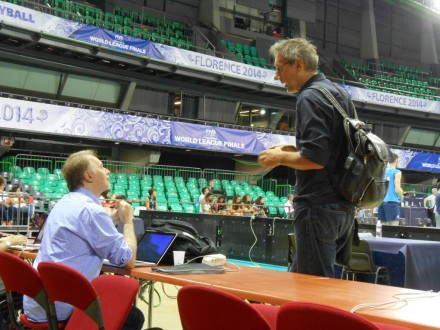 With 201 cm of height simply cannot be unnoticed. Everybody just raise their heads and say “Zorzi came”. In that moment every person in press room wants to speak with him, or just to say “Hello”. We think that no one has respect as he of his fellow journalists, and of course players.

The WorldofVolley took the opportunity to speak with him about F6 of World League.

Who will win this tournament in Florence?

“I will say that Russia and Italy will be the favorites for the trophy. Russia, because is the best team since many years or since three years. They have great players, physically, technically. They started with the second team but then when they started to play with the best players they took wins easily. And I think that they are very confident, so they had very big successes in the last couple of years and if you have confident then you can play the best volleyball very offend.” said Zorzi and continues

“Italy is a very good team and in the last three of four years we always ranked between the top teams. I think that the players in all rolls very good. We have a good spikers, good middle blockers, setters…so little step which we need is WIN. Probably this is the key; organizing the final tournament in Italy, coming from the international round, double phase – the first six matches are wonderful and the other six are ugly.”

“So, I think that they feel the pressure but they have to be good enough to support this pressure and remember that goal is to win. I know that just one team will be a winner but any team has to believe that they have to go to the gold. Sometime seems to me that they are trying to hide from responsibility “Yes, o.k., but..” There is a lot of but, but as a player you have to lose your concentration and energy because you thinking about that “but”. Think what’s going on, about opponents or focus on just one result. I think this is a right time to make this step. It wouldn’t be easy because the opponents are very good, because playing at home could be good but also could be bad. We will see”

And what do you think about Iran? Have they surprised you?

“At the beginning of the season I wrote on the FIVB blog that for Iran will be difficult to play on the same level as last year because my opinion was that they not finished the development process. The idea to change the coach was good but in the same time uncertain because no one knew what might happen. Velasco is a good coach and thanks to him, Iran has progressed and achieved the good results. But they really surprised me. They started with victories in Italy, lost a couple of matches but after that again continued with good play. I am very happy to see them because I like the team and congratulations to Kovač and players, they did a great job.”

Is Australia the biggest surprise on this tournament?

“Yes, definitely. I think that France had a better chance to come here. Technically speaking, I think that French team is better than Australia but probably last point was crucial and the fact that game played in Australia. I’m happy because of them, Australia is a very interesting team and country but I don’t think that they have a lot of chance here. The technical level between the first two groups and third is a big different. This is a huge success for them“

Will you be soft or hard in the comments?

“I don’t know am I usually soft or hard but I usually I try to find a compromise between very specific opinions of technical and tactical things and something not too complicate. I think that everybody needs a chance to understand what is going on. I’m happy because in these next days I will have a lot of friends here, coaches and players and we can share some opinions. I will focus on the best moments of the day, telling something about Russia, Brazil and Italy, what is a key of the day… “

Which profession you prefer – journalist or player?

“O, you can’t compare that. I think being journalist after a long career is a good opportunity to stay in my world, to follow what I love. I like to watch volleyball, to talk about volleyball; I just like to be a journalist. I follow a lot of sports but I am always hungry of volleyball. You cannot compare emotions of player with emotions of journalist but what the sport has taught me is that you have to do your best in the conditions where you are. So I can’t be a player and I enjoy a lot being a journalist.” said legendary Zorro.

*Prohibited from using text or images without source will be monetarily punished.

Zorro, your prediction was bad! Russia is out!