Just over 13 years ago Nalbert Bitencourt stood inside Spodek a first-time winner of the World League and, today, Brazil's decorated world and Olympic champion stands inside Spodek again, but this time with a microphone as a television commentator. 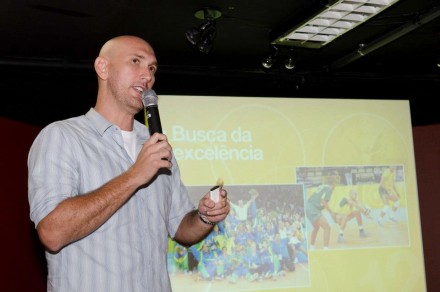 Like Brazil’s current coach Bernardinho, Katowice’s ‘flying saucer’ holds particularly good memories for Nalbert as he was a key figure in the team’s 2001 World League victory and describes a return to the venue as emotional.

“It was the start of a big story, a team with a lot of victories,” Nalbert said.

“We all have a very special feeling for Poland because of everything that title represented. It was also my best moment as an athlete, so I carry a lot of feeling for that time.“

After a sixth-place finish at the 2000 Olympic Games in Sydney, Brazil were at a low ebb, but with the appointment of Bernardinho, and despite not expecting it, they turned a corner in the 2001 World League, taking their second title, but first since 1993.

“We needed to recuperate,” said Nalbert about Brazil’s post-Sydney period. “And what happened? The title came in an unexpected way, because originally our objective was to get on the podium, but we ended up winning the competition.“

In his role as an expert analyst for Brazilian cable channel SporTV – one he started at the previous World Championships in Italy in 2010 – Nalbert will be watching every ball with interest and feels a big responsibility to give his audience back in Brazil the full benefit of his experience.

“It’s really fun, but it’s not easy,” he said of life behind a microphone. “In the past it was my shoulders and knees that hurt, but now it’s my voice. You have to concentrate hard to do a good job and I always try to give an idea from someone who was already there on the court, to put myself in the place of the players, and that’s good because there are some difficult moments that only some players would understand, and I can pass them to the public.”

RUS W: Gamova – “Ze Roberto is an intelligent man, we will chat soon”

ADEUS, MESTRE: One of the best-ever world...