EXCLUSIVE FOR WOV (PART 2): Giovanni Guidetti – “Kazan did not play against the best VakifBank”

Here is the second part of the interview with Giovanni Guidetti, head coach of VakifBank. In this part, he talked about the current season and the previous one, about main rivals in Turkey, Canes, final against Dinamo Kazan, how Jovana Brakočević injured her finger… 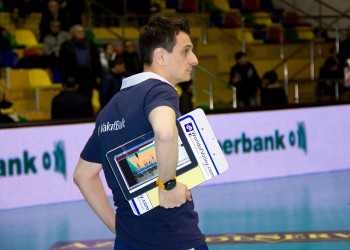 “This season will be interesting because other teams are tired to see VakifBank winning everything. They have built extraordinary teams. Eczacibasi is really, really strong, then Fenerbahce is very quality team, especially when Bosetti returns, Galatasaray is also not bad… Talking about the Champions League there is Cannes which is always very tough for us, then of course clubs from Russia, Azerbaijan, Italy… It will be a difficult season, but we play to win everything. We know that it is impossible to win 73 matches in a row in every season, but no one can stop us to try.”

VakifBank changed a lot of foreign players during the past summer, but Guidetti does not see that as a problem:

“VakifBank is trying to have the best foreign players in the world. We can’t have all of them, but I think we have a great players. But, the main power of VakifBank is our base made of the best Turkish players. Then it is much easier for foreigners to fit in. It is like we already have an orchestra, and we are adding only a new member to play a violin. So even if the new member makes mistakes at the beginning, our music goes on. I remember that one foreign player told me after only couple of trainings that she feels like she has been a player of VakifBank for years.”

Excellent expert admitted that he is not satisfied with the last season, despite winning four trophies:

“Of course I am not satisfied, because we lost the Champions League. It’s not that I am dissatisfied because of the defeat, I am dissatisfied because we did not arrive on that Final Four in our best shape. I must say that champion Dinamo Kazan played a great volleyball last season. Larson, Gamova, Del Core… They did an amazing job. But, they did not play against the best VakifBank.”

“We arrived there with so many little problems. For example, Jovana (Brakocevic), who was our best player, cut the finger on the training on a stupid, stupid way. We tried to recover her, but she has not arrived there in her best form. Despite all of that the last season in considered to be the most successful in club’s history as we reached 5 finals and won 4 trophies. And, we are not satisfied!? We are not arrogant, and we will never underestimate other clubs. Never. But we are VakifBank and we are used to win trophies.”

NEW YEAR’S INTERVIEW: Alen Pajenk – “If I could choose, I would be opposite”