Germany: Participation in Champions League is turning into unique experience for DRESDNER SC

Dresden, Germany, December 19, 2011. DRESDNER SC has been going through many ups and downs in the past days, first missing out on a semifinal spot for the national cup after losing the quarterfinal match to VC WIESBADEN and then suffering a home defeat to ASPTT MULHOUSE of France in the third week of action for the League Round of the 2012 CEV Volleyball Champions League. 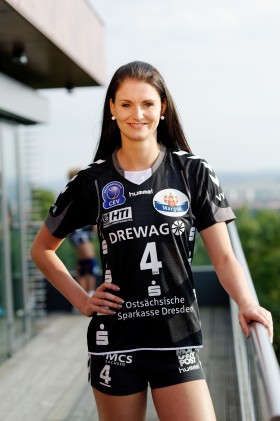 In this interview team captain Stefanie Karg (pictured) shares her feelings after battling for three legs in Europe’s most elitist competition and about her preparations for the upcoming Christmas time.

Last Wednesday you played a fantastic first set with ASPTT MULHOUSE. Why could not you keep up that good tempo also for the remainder of the match?

After losing only two days before in the national cup it was not easy to change everything and reset our minds. We lack consistency at the moment and there are some reasons for this. We have a couple of players that are injured, so the others have to play more even if they are not fully fit or rather inexperienced.

After losing three matches in a row, do you still see some chances to make it to the 1/8 finals in the Champions League?

Everything is possible, as maybe we can cause a surprise by taking points from the strongest teams of the group, Fenerbahce Universal ISTANBUL and Rabita BAKU. We have very limited chances to get to the next round but we will fight bravely this week in Mulhouse. We want to show our best play there and if this is the case, we can seize the night.

Do you still think you are learning from your first experience in the Champions League?

Of course, every single point contributes to improve our play especially if you play strong sides like Fenerbahce or Rabita. This experience will help us also for the remainder of the season. Our players have been improving their individual skills while we have also stepped up as a team. Via the participation in the Champions League DRESDNER SC is getting a totally different name in the European arena. We are turning into an example also for the other clubs of the Bundesliga as we also did after winning the Challenge Cup back in 2010.

You lost to ASPTT MULHOUSE after missing the semis of the national cup but this past Saturday you got back on track by edging USC MÜNSTER in the Bundesliga. Is this win important for the confidence of the team?

We have to take the competitions separately. We have failed to achieve our goal in the national cup and we have to move ahead concentrating on the national league. We are currently ranked second there so I think we are on a good track.
Recently the team enjoyed a day off after playing 4 matches in 7 days.

How did you relax?

My free day was over at 6 pm. I went to the doctor in the morning and then to the physiotherapist. At the end of the day we had some individual training and afterwards went for some shopping to get some time for myself.

You are going to have a busy schedule also in the next few days. Back from Mulhouse you will play on Friday against VT Aurubis HAMBURG. When are you going to buy your Christmas gifts?

I already bought most of my presents; I had a couple of days for this some time ago, as I knew I would not have had time right before Christmas.