Okolić for WoV – „I stand behind the fact that Moculescu is a coaching legend!“

Aleksandar Okolić has been an irreplaceable link in the chain of Berlin Recycling Volleys in the last two seasons in which they conquered German men’s volleyball championship Bundesliga. 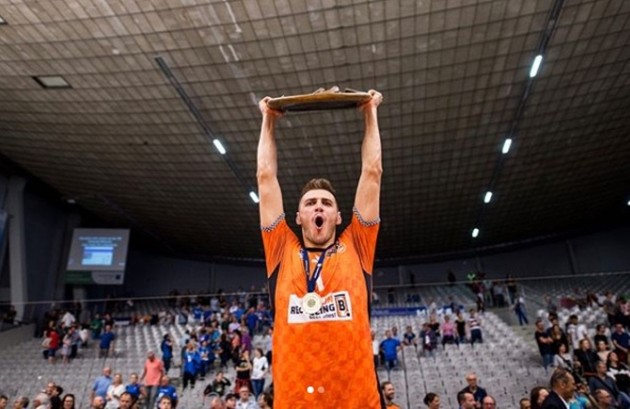 How did it feel to face the team that was unbeaten in the national championship and, for a long time, unbeaten in all competitions in which it participated, in the playoff finals?

„The feeling of playing against the team that didn’t lose a single game in the championship was very exciting and special in its own way because we knew that every game against them demands full attention and focus. They don’t lose nerves and they are patient. That’s why they were successful throughout the season in which we used to fall because we were losing nerves, weren’t patient enough and didn’t follow the plan. All of that was due to the fact we burned ourselves out trying to win,“ Okolić started his interview to our website.

In your opinion, what was the difference between the games you played against Friedrichshafen in the 2018 CEV Champions League Playoffs 12 and in the Bundesliga playoffs? It was visible that you and your teammates made a noticeable progress in the play…

„The difference between these games wasn’t big because we wanted to beat them at all costs. As for the Champions League, we regret because we didn’t advance to the next round and took the opportunity against the team which was not so tough compared to the other teams that qualified for the Playoff 12. However, we have many problems as a team at the moment because that’s when the coach changed and Moculescu came. As a team, we were in trouble.“

Were you a bit afraid when Friedrichshafen tied the final series at 2-2? How did the entire team cope with this?

„Honestly, Game 5 was quite relaxing for me and I think that was one of the main reasons for our victory in the finals. Without pressure, without tension… but wholehearted!“

Last season, you had the opportunity to collaborate with one of the most successful coaches ever in the European volleyball, Stelian Moculescu. How did the working with him look like to you?

„By my opinion, Stelian is one of the best coaches I’ve ever met, of course, beside Nikola Grbić, who has taught me a lot in the last few years. Stelian is a highly demanding coach, he knows what he wants, how to show it and organize the training. I learned a lot from him in the last three months since he came to BR Volleys. I appreciate him a lot as a person and I stand behind the fact that he is a coaching legend! I thank him for teaching me some things that I needed and for showing me the way to control myself. Right after we won the title, he even gave me a few pieces of advice while we were still on the court regarding my future and career. Really, well done. Not many coaches can do that.“

It was obvious that BR Volleys players were reborn with the arrival of Moculescu. Which novelties did he bring in the work, both in the training and in the games, which contributed for you to start playing better?

„He’s the coach that loves patient play, not so aggressive… A player needs to perform the way he says. Otherwise, you will not be in the lineup. As long as you follow his demands and instructions, it’s all great. The training under him is exhausting with a lot of basic stuff, a textbook volleyball. But, in the end, in the final, that’s what was crucial to winning the title…“

German media reported that BR Volleys are in the talks with you and several other players on the contract extension. What are your plans?

„Frankly, I’ve been in Berlin for two years now and I have a contract valid for one more year. But, we will see, all options are open because I would like to try myself in a stronger league in which I can mature more both as a player and as a person…“

As it was expected, your name was on the preliminary list of Serbia national team for the 2018 FIVB Volleyball Nations League. What are the chances of Serbia to win a medal in the tournament? Is the primary goal to perform at a high level in the 2018 FIVB World Championship?

„When you have Nikola (Grbić) as your coach, every tournament, every game is important. That’s the reason why Serbia is where it is… Our primary goal is to play the Nations League well, to be in the best condition for the World Championship and, of course, to be ready for each game. Nikola has serious plans when it comes to practicing and knows how to rule the situation. After all, he’s volleyball legend. Our goals are very high and we know what we’re capable of. I think that we already proved it at some major tournaments. This summer is going to exhausting but we believe in us and this team!“ Okolić concluded the interview.