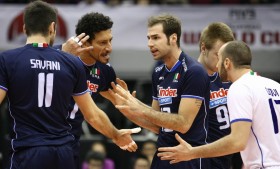 Dragon Travica and Italy played well against Serbia, picking up a win

Leading the Italians on Monday was Michal Lasko, the tournaments’ leading scorer, posting 22 points. For the losing Serbian side, it was the young Aleksandar Atanasijevic with 20 points. Italy out-blocked Serbia 17-10 and delivered eight aces to Serbia’s two.

Italy’s Ivan Zaytsev was attacking to start the match with four points early to help his side up 9-7. His captain Cristian Savani followed with a spike and a well-placed ace to extend to 16-12. Serbia rallied back to 20-18 on Atanasijevic’s own ace, but he’d cancel that out with a net service, giving Italy a chance to close it out. Lasko did just that with a pair of spikes (of his seven in the set), and Italy would take the set 25-20.

Alessandro Fei started hot in the second four points — including three stunning blocks — to put his side up 8-5. Lasko continued the block party with a stop of his own on Milos Terzic to extend to four, and Savani and Fei brought the lead to five with two more to go up 16-11. Zaytsev pitched in three points late, including another block on Uros Kovacevic, and the setter Dragan Travica capped the frame with back-to-back aces, 25-18, two sets zero. Italy had 10 blocks in the set.

Italy struggled to start in the third, with five errors (three from the service line) letting Serbia jump ahead 8-5. Uros Kovacevic finally started to find a way around the Italian blockers mid-set, dropping three points from the wing followed by another from Atanasijevic to go up 17-11. But Italy clawed their way back with a run of five unanswered, tying it on a Lasko spike 21-21, but they’d commit two more errors in the crunch, and an Uros Kovacevic block on Lasko stole the set for Serbia, 25-22, down one set to two.

Lasko started Italy off well in the fourth, going up three with an early ace. But Serbia would rally back to tie, and they’d stick close all the way to 14-14, when a hard Serbia spike hit Simone Parodi in the mouth. He showed toughness moments later — personifying Italy’s resilience and composure in this match — shaking it off to put his side up two with a stuff block. From there it was more Lasko, who continued his great attacking until the end, his tenth point of the set closing it 25-20, three sets to one.

That’s why Italy need him – Juantorena’s...