President of the European Volleyball Confederation, Andre Meyer, a regular visitor to all major international competitions, and also the "witness" the development of volleyball in Serbia, because our selection for all Championships, to be a number of aspects to talk about the Serbian volleyball, . In Japan, he watched almost every game of Serbian women national team, but also held numerous meetings with Alexander Boricic. 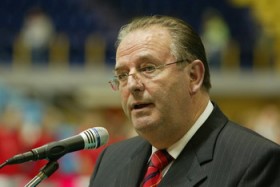 In Japan, he watched almost every game of Serbian women national team, but also held numerous meetings with Alexander Boricic.

For many years you are at the head of the CEV. How do you comment on your cooperation?
– We both come from the sport and we are not theorists. We are committed to work, we have certain principles which we hold and it brings results. So I hope that we will continue to cooperate well.

Is this cooperation regards also on the time when you come to be at the head of the FIVB, and Alexander Boričić become the first man of European volleyball?
–There will be no change. For a long time we cooperate so we know that everything will remain business as usual.

How do you rate the organization recently completed European Championship for Women of which Serbia was ogranizator?
–I was unable to come because of the many obligations that I had, but the staff I got great news about the excellent organization, which is normal to when Serbia is organizing a competition. There was a lot of the audience, which shows that were done a great promotion of volleyball. I know that a lot of help and minister to understand the sport and what it requires. Means a lot when the voleyball is largely promoted in schools, and this is the case in Serbia. After everything I’ve said, no wonder the sport’s number one is voleyball in your country.

When we take the economic situation, who is the better host of major  competitions, Japan, where the championships are ofthen held, or Serbia?
– It is difficult to answer. First of all, these are the two continents, each has its advantages, but the volleyball is extremely popular in both countries. Now in Japan with them gripped a small crisis, the earthquake and the problems with nuclear power.

On one occasion you said that our women’s national team head coach Zoran Terzic is one of the best coaches. What do you like in his work ?
–He created a good atmosphere between girls. They are very young, often of 20 years old, I know it’s not easy, but he has succeeded. Ultimately the your team’s results say it all.

Many people when they come to Serbia, “let” the magic of Serbian cuisine. Whether you’re one of those?
–In agreement with Alexander Boricic, mostly eat fish, and on beef. I tried some other things. Simple, no errors – the food is in Serbia, as well as volleyball, high.