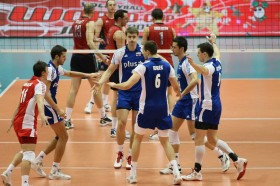 Poland celebrate after claiming their sixth win in the tournament

Poland entered the contest with a 5-1 mark, the only blemish being a five-set loss to Iran in the second round in Osaka. The U.S., which is 3-4 after the defeat, could not cope with Poland’s towering front line and power game on this day.

Zbigniew Bartman paced Poland with 16 points. Bartosz Kurek added 14 in the win. Lukasz Zygadlo was named the most impressive player of the match.

Clayton Stanley led the U.S. with 10 points while Matthew Anderson chipped in with nine.

A Kurek spike gave Poland an early 4-2 lead in the opening set. Marcin Mozdzonek‘s spike made it 7-5 and Winiarski‘s blast took Poland into the first TTO with an 8-5 margin. William Priddy‘s spike down the middle made it 10-7 for the Poles. Clayton‘s serve into the net took it to 12-8. Bartman blasted a spike for 14-10. Kurek’s spike gave Poland a 16-11 lead at the second TTO. A service ace by Priddy pulled the U.S. within 16-13. Michal Winiarski‘s spike made it 18-12 and the U.S. called a timeout. Bartman’s service ace made it 20-13. Another Bartman spike moved it to 22-15 as Poland closed in on the set. Piotr Nowakowski‘s spike gave Poland set point and it ended 25-15. Bartman had eight points in the set.

Poland bolted to a 5-1 lead in the third set and the U.S. took a timeout. A Stanley spike made it 7-4 for Poland. Winiarski delivered a spike to put Poland on top 8-4 at the first TTO. Bartman’s service ace put Poland up 10-5. A Kurek spike made it 14-8 and the U.S. could feel the match slipping away and called a timeout. Mozdzonek’s spike sent Poland into the second TTO with a seven-point advantage at 16-9. A poor serve by the U.S. made it 19-12. A nice block by Ryan Millar pulled the U.S. with five points at 21-16 and Poland took a timeout. Another block by Poland made it 23-18 and then Stanley had a spike rejected to make it match point. Bartman ended it 25-18 with a blistering spike.

CC: Derbies in Germany and Poland