Brazil vs. Italy and Russia vs. France emerged as the two semifinal clashes of the FIVB Volleyball Men's U21 World Championship in Ankara. 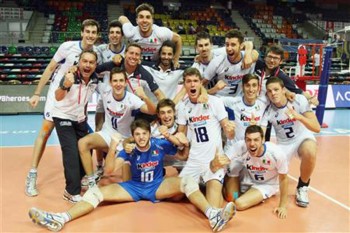 Curiously, all four winners of Friday’s semifinals come from the same pool and already know each other pretty well.  On the first competition day of Pool B in Izmir last week Brazil managed to shut out Italy; two days later Russia did the same to France.

With three of the four quarterfinals in the Turkish capital finishing in straight sets, the thrilling five-setter between Argentina and Italy was by far the most interesting game at the Baskent Volleyball Hall on Friday afternoon.  The European champions Italy overpowered the fighting Argentinean team by 3-2 (25-20, 23-25, 20-25, 25-15, 15-11) to qualify for the semifinals.  Despite a five-point series by Argentina in the middle of the first set, Italy stayed focused to take the lead in the match.

Argentina’s swift response was to claim the following two sets, taking advantage of the quite a few Italian errors. The European side reacted with an impressive 25-15 in the fourth set as substitute player Gabriele Nelli contributed as many as 8 successful spikes.  In a closely contested fifth set the gap never went wider than one point through 11-11.  This is when Italy made their final run to the semifinals. With Luca Borgogno serving, they scored 4 points in a row to end the match at 15-11 and unleash the celebration.

For more information about this competition, click on Junior World Championship 2013 M