Two weeks before their first home match scheduled for October 30 where they will host Turkey’s Halkbank ANKARA, Romania’s champions Tomis CONSTANTA got the opportunity to discuss with local and national media the goals and expectations they have for their second consecutive campaign in the CEV DenizBank Volleyball Champions League 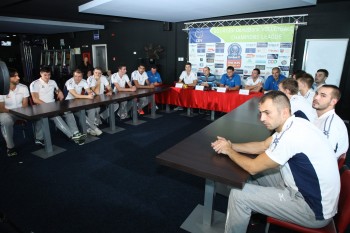 Last year Tomis got to play in the “group of death” including PGE Skra BELCHATOW, Dinamo MOSCOW, and Fenerbahce Grundig ISTANBUL. This time the Pool is not less demanding with the likes of Halkbank, JASTRZEBSKI Wegiel, and Hypo Tirol INNSBRUCK, but Tomis wants to make the Playoffs.

Tomis will debut on October 23 playing Hypo Tirol at the Olympic stadium in Innsbruck. “We will play to win every game and even though we are set to play very strong opponents, we are also capable of displaying world-class Volleyball” said the Bulgarian coach of Tomis, Martin Stoev. “Very good players were added to our roster this year and I hope we can start with an away victory next week in Innsbruck. We also would like to have as many supporters as possible in attendance for each one of our home matches.”

“I hope we can achieve good results in this year’s Champions League,” added team captain and setter Andrey Zhekov. “We know that Halkbank and JASTRZEBSKI are the favourites in our pool but this does not mean we do not stand a chance to make the Playoffs.”

“I really look forward to the start of the season” stressed Romanian middle-blocker Andrei Spinu. “We are very excited for we get the chance to play again in the Champions League and we want to make it out of pool play.”

“I would like to thank the players who accepted our invitation to play for Tomis in the 2013/2014 season” said club President Sorin Gabriel Strutinsky. “This year we want to retain our titles in the national league and national cup and perform better than we did last year in the CEV DenizBank Volleyball Champions League. We are ready to embark on this adventure”.

RUS M: Wild card for final-six will be announced ‘till 15th November