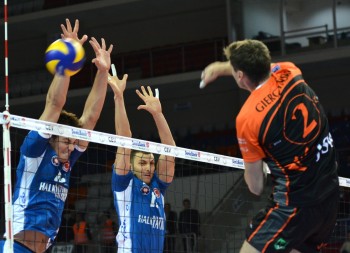 The real power of Halkbank was presented in second and third set in which away team all together didn’t win points as in first one. Nevertheless, Jastrzebski could have taken this game in tie-break, as they had 17-16 advantage in fourth set.

But, after a time-out, Turkish giant made 7-4 series and finished the job after bad service of Polish side.

Halkbank was headed by Matey Kaziyski who made 23 points and left behind Osmany Juantorena Portuondo with 21 points. In away team better than others were Michal Lasko (19) and Simon Van de Voorde (15).

CC M: Half of work done for PAOK and Novgorod