Ankara, Turkey, April 30, 2012. With the Technical Meeting taking place late Monday evening, everything is now ready for the 2012 Olympic Games - European Qualification for women to get underway tomorrow in Ankara. 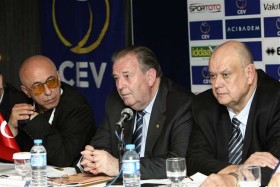 CEV President André Meyer attended the meeting to wish the eight European teams participating in the tournament good luck.  He will personally watch the first several games from the stands at the Baskent volleyball hall in the Turkish capital.

Many national federation presidents are also expected to be among the spectators of this fierce competition for a single ticket to the London Olympics this summer. With Italy being the only European team that secured itself an Olympic quota through the 2011 FIVB World Cup, the lineup of squads that made it to the European Qualification in Ankara is more than impressive.

Hosts Turkey and Germany are the main two contenders to emerge into the semifinals from Pool A.

They finished third and second, respectively, at the 2011 CEV Volleyball European Championship, but even this is no guarantee that they will have an easy task against the likes of Bulgaria and Croatia who may always create an upset.

”I think Turkey is the favorite because this is their homeland and they have lots of fans who will support them.  I had great expectations for this tournament, but my two of my players got sick and two other were also not able to come”, admits the head coach of Croatia Damir Jurko.

His counterpart from the German team Giovanni Guidetti shares this opinion, but not quite: ”I think Russia is the favorite, because they came with the same team that became World Champion…  And Turkey, because almost all their players played together.  All our players came from different leagues at different times and we did our first training together on April 23.  But this is not an excuse and we are ready and very motivated to fight for the ticket to London.”

”This tournament will be very hard for all teams.  We will try to do our best,” head coach of Turkey Marco Aurelio Motta adds while the mentor of the Bulgarian team Marcello Abbondanza is certainly not waving a white flag either: ”The level is very high and winning the pass to London is going to be very difficult for everybody, especially for teams like us and Croatia, but we are here to do our best and we will give some hard time to each of our opponents.”

Current World Champion Russia surprisingly had to go through the pre-qualification round to make it to Ankara, but came to the Turkish capital with a roster boasting some of the world’s best players.

In Pool B of this tournament the Russians will be enjoying the company of European Champion Serbia and traditionally strong Poland and the Netherlands.

”Our pool is the group of death, it is hard, but it that’s OK, because we will win.  The most interesting thing is that seven teams booked their flights for May 7.  This means that all of them came here to win.”  These are the confident words of Polish head coach Alojzy Swiderek.

Dutch mentor Gido Vermeulen who recently took over the team of the Netherlands is more humble: ”We are delighted to be in Ankara and enjoying the hospitality of the Turkish Federation.  We are very happy with the good organization which gives us the opportunity to show the best of our game.”

Although Serbia is considered among the top contenders for the Olympic visa, head coach Zoran Terzic points to Russia and Turkey as the tournament favorites: ”Russia is the most likely winner and, of course, Turkey who plays at home in a very nice atmosphere.  Of course, all other teams, including us, will try to take the first place, but it will be very difficult.”

The Russian team manager Andrey Erkhov downplays a bit his squad’s role as a tournament favorite: ”All teams have equal chances.  We did not have enough time to prepare as the Russian championship ended on April 13.  We have some experienced players on our roster, but all our players are important for achieving team success.”