Ankara, Turkey, May 1, 2012. The home team of the 2012 Olympic Games - European Qualification made an impressive start of the tournament in Ankara. Turkey proved too strong for its first opponent Bulgaria and delighted the local spectators with a 3:0 (25-21, 25-17, 25-15) victory. 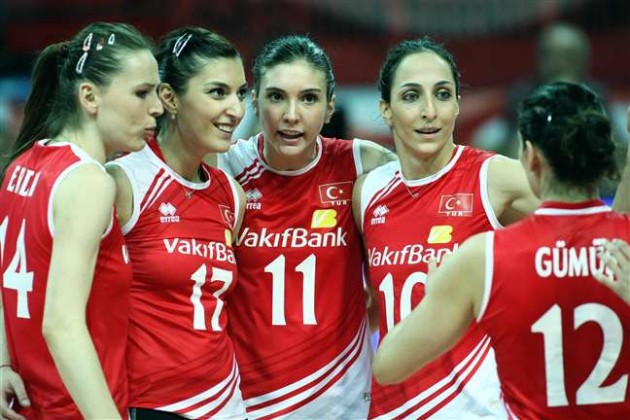 The Turkish team started very strong in the game. The noisy crowd at Baskent hall not only motivated the home heroines, but also seemed to have intimidated the Bulgarian players. Although the Bulgarian attack was somewhat more prolific with 5 points coming from Elitsa Vasileva, the blocking efforts by the Turkish girls is what made the biggest difference in this set for a final 25-21 in favor of Marco Aurelio Motta’s squad.

In the second set both teams were more concentrated and greatly reduced the number of errors in their performance. The Turkish team, however, also stepped up the power in offense and established domination on the court. Captain Esra Gümüs scored 8 impressive points in this set and closed it herself with a kill block for 25-17.

Despite some changes to his lineup that Italian-born mentor of Bulgaria Marcello Abbondanza made for the beginning of the third set, the home heroines were now cruising towards a straight-set victory. Strongly encouraged by their enthusiastic fans, they proved way too strong for their opponents in this set. Turkish serving gave Bulgaria a lot of hard time as Gümüs continued to score point after point to pile up a huge gap that led up to a convincing final score of 25-15 in the set.

To no one’s surprise Gümüs emerged as the game’s top scorer with 18 points on her tally.  Eva Yaneva, who was in role of an opposite for the first two sets, but then switched to a receiver position for the third, scored 10 points for Bulgaria.

Bulgarian captain Strashimira Filipova did not hide her frustration from the outcome of this game: “We had a bad start. We could not show our real performance.  We made lots of mistakes and that is why we lost.”

Her Turkish counterpart Esra Gümüs expressed her satisfaction with the win: “We are happy to begin with a clean-sweep victory.  This is a good start and we are already looking forward to the following matches.”

”We played against a very strong team. This makes it hard for us, but it helps us understand the distance we have to walk to catch up with those ahead of us,” Bulgaria’s head coach Marcello Abbondanza stated and added that the spectators in the hall did not make things easier for his team.

”We thought that it was going to be a challenging match,” Turkey’s mentor Marco Aurelio Motta explained.  “We played very well, especially in reception, serving and blocking.  We could not prepare long enough for this tournament, but it was the same for the other teams.  But our motivation was very high and I am so satisfied with our performance today.  Ankara is a special place for the Turkish national teams. I also congratulate the young players of Bulgaria.”

WCH M: These are Pools of second...