Brussels, Belgium, May 1, 2012. Some ten days after Noliko MAASEIK extended its supremacy in the men’s division by taking the Championship series with Euphony ASSE-LENNIK after scoring three consecutive wins, Asterix KIELDRECHT came out on top of the standings in Belgium women’s national league by seizing the day with a 3:1 home victory in the deciding match against VDK GENT Dames. 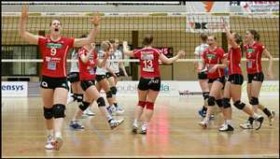 The group around head coach Gert Van de Broek, who is also the mentor of Belgium’s national team, opened the Championship series with VDK GENT Dames – a surprising semifinalist in this year’s CEV Volleyball Challenge Cup – by scoring a 3:0 away win before losing the second match 2:3 at home.

However, Asterix regrouped pretty well for the last showdown of this domestic season to claim the crown for the third consecutive year.

At the end of the club season a jury of specialists voted Jelte Maan of Noliko MAASEIK and Freya Aelbrecht of Asterix KIELDRECHT “players of the year”, while Vital Heynen and Stijn Morand – mentors of Noliko and VDK GENT respectively – were nominated best coaches of the 2011/2012 campaign.