written by WoV May 2, 2012 source: volleycountry.com 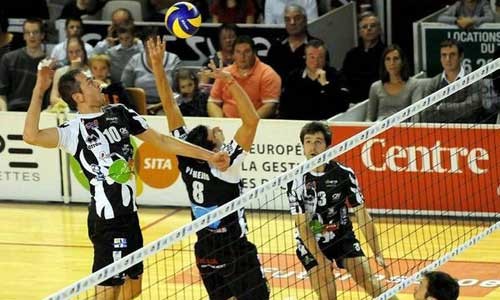 After winning French championship Tours faced with many departures. Czech MB Petr Konecny retired so they needed to find replacement. They found it in Ajaccio’s MB Stanislav Simin. Another MB joined Tours, Gerald Hardy Dessources returned in France after just one season abroad. Experienced MB was part of Tours in 2005. when they won Champions league.

Argentinian libero Alexis Gonzalez is returning to his homeland and will be replaced with fomer Beauvais player Florian Kilama. Ajaccio strenghted squad with 2 very good players.

After one season in Nantes setter Rusmir Halilović returned in Ajaccio. One of the best opposite in last few seasons Jovica Simovski landed on Corsica. Macedonian opposite signed 2 year contract and is considered as a key player.

After Edouard Rowlandson another player leaving Sete. French NT opposite Marien Moreau is leaving Sete and probably going in Asia. Main reason for this is financial, as Moreau said he wants to earn more money.

Situation in Poitiers is quite hard. Due financial difficulties there are no new contracts in Poitiers but captain Nicholas Marechal surely leaving Poitiers. His next destination could be Cannes. Also setter Audric could join him on French riviera. Nuno Pinheiro already signed with Tours. Petrović, Wanderson, Alpha and Zopie are still in talks with club and there is possibility for them to stay.

Pierre Pujol is the first wish after he left Kielce. American outside hitter Robert Tarr is still in negotiations regarding new contract while Canadian outside hitter Nicholas Cundy and Cameroon NT opposite David Feughouo are leaving Cannes.

Narbonne got new coach. Italian born Gianpaolo Medei will lead club in new season. Medei was assistant coach in Modena this season. For now Narbonne signed only one player, libero Rija Rafidison while setter Moreno and outside hitter Patuc left the club.