The Dominican Republic became the sixth women’s team to qualify to the volleyball tournament at the 2012 London Games after defeating Cuba in four thrilling sets 25-18, 25-23, 27-29, 25-20 in the final of the NORCECA Olympic Qualification Tournament held in Tijuana, Mexico on Saturday. 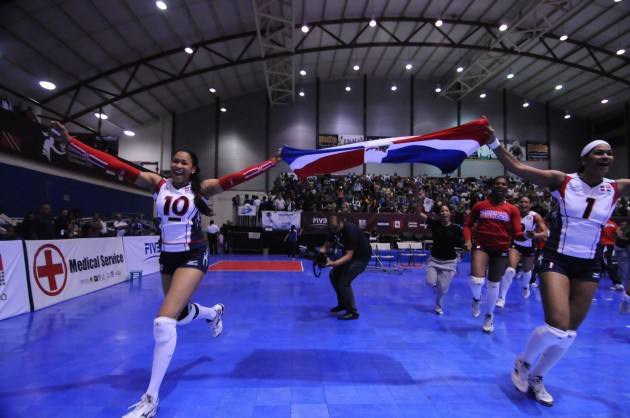 The world No. 9 joins Italy, United States and China – who qualified to London through the FIVB World Cup last November in Japan – African champions Algeria and hosts Great Britain. A total of 12 teams will eventually qualify with the Europe final taking place on Sunday followed by the South America qualification tournament (one vacancy) next week and a combined Asia and World Olympic Qualification Tournament, which offers one and three more vacancies respectively, later this month.

It is the second time that the Dominican Republic has qualified for the Olympics having finished 11th in their first edition in 2004 in Athens, Greece.

The Dominicans held a 13-9 advantage in the blocking department with Vargas leading with four blocks followed by Eve and Cabral with three apiece. The winners also were better in the service division 9-3 with Vargas registering three

“To tell the truth I don’t have words to say what the feeling is,” said Brazilian Marcos Kwiek, the coach of Dominican Republic.

This is the result of four years of hard work and we were rewarded with the ticket to the London Games. The girls did a fantastic job and kept a high level of concentration during the whole tournament and I also want to thank my technical staff and all the people who have supported us.”

Dominican Republic captain Cabral said: “I want to thank our head coach. In this match we went on to the court with a lot of desire. We fought and wanted badly to go to London 2012.”

Hosts Mexico handed Costa Rica a 3-0 (25-15, 25-21, 25-22) defeat in the match for fifth place. Alejandra Isiordia and Karla Sainz were Mexico’s top scorers with 16 and 10 points respectively and Claudia Rios added seven. Costa Rica’s Verania Willis had a match-high 21 points and Karen Cope charted eight. Both teams served six aces but Mexico was better in the blocking category 8-4. Costa Rica made 27 errors to 18 by the winners.