Brazil can defend their title for the fourth time in World Grand Prix history after achieving this feat in 2005, 2006 and 2009. Brazil are the most successful team in the World Grand Prix with nine titles and have been finalists for the last six seasons. 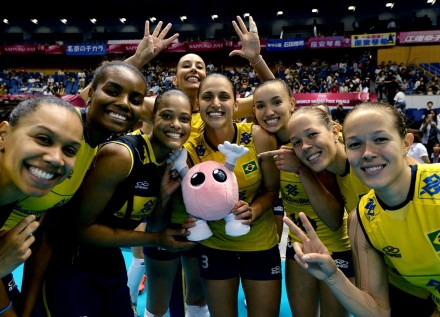 ·     The World Grand Prix Intercontinental Round is split into three groups.

·     Debutants Belgium recorded their best season in 2013 when they won bronze at the European Championship defeating Serbia, and silver in the European Volleyball League behind Germany.

·     Canada will be playing the World Grand Prix for the second time since 2003.

·     Peru will be appearing in the World Grand Prix for the third time and have recorded only one victory so far.

·     Poland will make their 11th consecutive appearance in the World Grand Prix.

·     Argentina have played 27 matches in the World Grand Prix and have won four times – all were five-set victories against the Dominican Republic, Cuba, Germany and Kazakhstan.

·     Cuba are the most experienced in their group stage with eight medals – two gold, four silver, two bronze.

·     With Cuba, the Netherlands are the only other gold medal winners in their World Grand Prix group; they have won three of their last four matches in the World Grand Prix, their only loss in this streak was against defending champions Brazil.

·     Puerto Rico have played 36 matches in the World Grand Prix, with five victories.

·     Kazakhstan will be in their fifth World Grand Prix season stint; their best result was in their debut season with a 10th place.

·     Australia are the first ever participants from Oceania, and the second non-European World Grand Prix debutants since 2009.

·     Algeria will be making their second appearance and have yet to win a match in the World Grand Prix.

·     Bulgaria will also be making their second World Grand Prix appearance, with a positive record of six wins and three defeats; they will automatically qualify to the Final Four in Group 3 as hosts.

·     Debutants Kenya are the most successful side in the African Championships, with eight titles and a second place finish.

·     First week hosts Mexico will make their debut in the competition, without any player active outside their home league.

BRA M: Rezende – “USA has a better system of volleyball than Brazil”